Yang Xiao Long alludes to Goldilocks[1] from the fairy tale Goldilocks and the Three Bears, which follows Team RWBY's theme of fairy tale allusions. This allusion has had the following influences on the character and the show:

Yang's emblem is a burning heart. This emblem appears on some of her possessions:

An old piece of concept art by Einlee shows one outfit with two different color palettes and two different scarves. This version of her outfit has seven differences from her battle outfit in the series:

There also appears to be a difference in physical appearance:

A second piece of concept art by Einlee shows an outfit that much more closely resembles the final design, with ten differences: 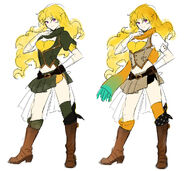 Concept art of a pair of outfit color palette choices, by Einlee 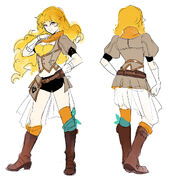 Concept art that is closer to her final design, by Einlee

Yang's outfit from the flashback in "Burning the Candle" can be seen more clearly in a piece of concept art by Kristina Nguyen.

Yang is depicted wearing a light brown shirt with puffy sleeves, similar to her battle outfit's jacket, that appears to be coming apart at the side. The split in the side of her shirt is held together by a crisscrossed stitching of black thread. Over her shirt, she is wearing an orange belt. She is wearing a pair of long, dull, dark brown shorts that end at the knee and have a notch on the inner side of the bottom of the leg. Her footwear consists of brown shoes and a pair of orange, folded-down socks. Her accessories are a yellow bandanna around her neck and a pair of orange ribbons tying her hair up into pigtails.

This childhood outfit bears similarities to Yang's battle outfit, most notably the sleeves of the shirt, the bandanna, the shoes, and the socks.

Throughout most of Volume 4, Yang wears an outfit that her concept art refers to as her "DGAS" outfit. Said concept art was drawn by Einlee. The final version that is seen in the show has the following differences from the concept art:

Original storyboard for the Volume 1 Opening