Weiss also alludes to another variation of Snow White in the fairytale Snow White and Rose Red. This allusion is a connection to how she and Ruby would become close partners.[3]

Weiss' emblem is a stylized depiction of a snowflake. She shares her emblem with the rest of her family and her family's company. This emblem appears on some of Weiss' possessions:

The original concept art of Weiss was revealed through a photograph of an old sketch by Monty Oum.[4] In it, Weiss is wearing a short, white and pale blue dress and a white and pale blue bolero. The collar of her bolero curves in close to her neck. Around her waist is a belt-like article with a pouch on the back. Around her neck is a silver necklace with a small pendant. She is wearing a pair of white high heeled boots, each with a strap around it. There appears to be a line down the outer side of the boot that may indicate a hidden zipper. The far edges of her bangs curve along the sides of her head, while the rest sweeps to her left. It appears that her ponytail curves up and then falls.

Between the two drawings of Weiss are a couple of doodles that resemble snowflakes.

Another piece of concept art, by Einlee, resembles the final design more closely. She is wearing the same outfit, with only five differences:

Her physical appearance has the following two differences:

This appears to be the stage at which Monty began considering changing her to being left-handed, considering the presence of the "left handed?" note.

Einlee also made an early draft of Weiss' portrait for the end card of the "White" Trailer, and the subsequent trailers, which shows her wielding a silhouette of an early version of Myrtenaster in her right hand. She has a beauty mark instead of a scar, and her pendant appears to be a tear-drop instead of an apple. Her ponytail splits in two partway down, with each half hanging to each side of her. The sleeves of her bolero have white tear-drop beads dangling from them. This portrait was edited to replace the beauty mark with her characteristic scar, remove the beads from her sleeves, shorten her ponytail, and remove the split from the ponytail. In this version of the portrait, she is shown holding a version of Myrtenaster that only contains red Dust, a leftover from before Monty Oum decided to color code Dust. This edited version of the portrait made it into the end card of the trailers. 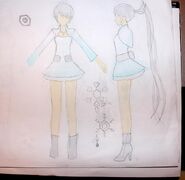 Concept art of Weiss' face and facial expressions, by Einlee

An early portrait of Weiss with a beauty mark and old Myrtenaster, by Einlee

The second version of Weiss' portrait, by Einlee

There is no visible difference between the show and concept art versions of the following outfit.

Original storyboard for the Volume 1 Opening

The Maya Weiss model in Volume 4