The weapons of various characters in RWBY are used to fight enemies and monsters throughout Remnant.

Most often, they are based on real-life weapons, but they can be combined with other weapons or given additional features to increase their versatility and effectiveness in combat.

Though standard weapons exist, the majority of weapons shown in RWBY are usually designed to be transformable, using a foldable frame - a framework capable of shifting various sections to change the weapon from one form into another in mere seconds. Weapons with a foldable frame possess two or more selected forms, and the wielder is capable of freely swapping between each weapon state depending on their needs.

Typically, such weapons would have both a melee state and a ranged combat state, but are not necessarily limited to those specific types of attacks while in each state. Weapons can also have an inactive state known as a "sheathed" form, locking and securing the weapon while outside of combat, similar to the safety catch of a firearm. For example, Crescent Rose and Ember Celica shrink down to be holstered and carried easily, while Crocea Mors and Gambol Shroud both have separate sheaths to make them easy to carry.

Some weapons are shown to be fueled by Dust for a more "magical" style of combat. By doing so, Huntsmen combine the brute force of the weapons themselves with effects like object enchantment and elemental attacks such as weather and nature manipulation.

Most of the known weapons incorporate Dust into their designs, either by utilizing Dust into an attack, as seen with Myrtenaster, or using Dust in the form of bullets or ammunition.[1] It is implied that all "firearms" in Remnant use Dust ammunition.

While Dust is used in most weapons in the series, not all weapons use it like Gillian Asturias' due to her hatred of Dust.

Image Gallery of Weapons that use Dust 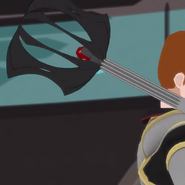 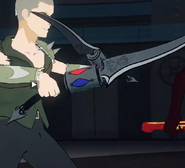 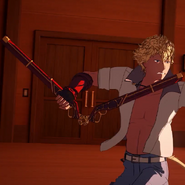 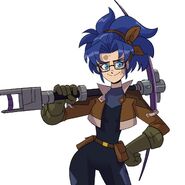 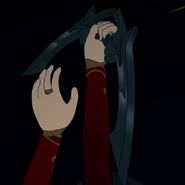 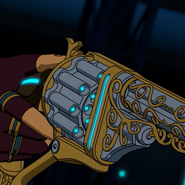 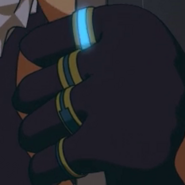 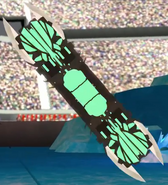 These weapons, while nearly impossible to create in reality, seem to be moderately easy to construct for the citizens of Remnant. Ruby had to design and build her weapon during her time at Signal Academy, and she expressed surprise at Jaune Arc for not making his own, indicating this is a common practice among future Huntsmen in Remnant.

When not in use, some people carry their weapons attached to magnetic clamps on their body. Ruby has one on her belt, Ren has two hanging from his hips and Nora, Blake and Neptune have one on their backs.

Beacon Academy students store their weapons in rocket propelled Lockers that can be called when needed.

Li Ren was the father of Lie Ren and a resident of Kuroyuri. He and his bow appeared in the episode "Kuroyuri". He was a hunter that gathered food for the city and used a bow. He used the bow when the Nuckelavee and other Grimm attacked the city. He faced the Nuckelavee, but it was ineffective and he was killed. Years later one of his arrows was found by Ren and Nora in the Nuckelavee's cave.

The bow is green, brown and gold and shares the aesthetic that Li, An and Ren all have. The arrow resembles a fleur-de-lis.

Shay D. Mann is a member of the Branwen Tribe and uses a crude pistol cobbled together from different parts. He uses it in "Lighting the Fire" and "Rest and Resolutions".

The revolver appears to have been damaged multiple times as it has scratches all over and is partially held together by bits of red wire. The handle is a brass knuckle and the bottom features a blade for melee combat. The entire handle section is held together with string and wire.

The pistol has a tendency to jam, which happened when he attacked Yang Xiao Long with some other bandits.

Dee was a Huntsman seen in "Argus Limited" that worked on the Argus Limited train. He used a large club that was able to expand, spin and generate electricity. The weapon was ineffective against the fast, flying Manticores which lead to his death at their claws.

Dudley is a Huntsman seen in "Argus Limited" that works on the Argus Limited train. His weapon of choice is a rifle, and he uses it to defend the train against the Manticores.

Gillian Asturias was a member of The Crown from RWBY: Before the Dawn.

Her weapon was a simple bow and arrow due to her hatred of technology. It also utilized no Dust in combat.

Jax Asturias was a member of The Crown from RWBY: Before the Dawn.

His weapon of choice was a simple sword, theorized to be an ancient sword from old Vacuo. However, he lacks much skill using it.

Umber Gorgoneion was a member of The Crown from RWBY: Before the Dawn.

Umber's weapon of choice was a series of whips. She can throw numerous whips at an opponent in order to restrain them, which Fox Alistair likens to a spider covering its prey with webs. She is also a skilled cage fighter, being able to hold her own in unarmed combat.

She uses it in RWBY: Before the Dawn.

The whips might allude to the snake theme of Umber's allusion of the Greek Medusa.

Mina Lavender is a member of Team SMMK from RWBY: The Grimm Campaign.

She wields a shotgun-axe as her weapon. The weapon is silver, black and brown. The top has a silver plate that matches Mina's armor.

Mina also has a Semblance that allows her to produce spider webs as weapons.

Marton is a member of Team SMMK from RWBY: The Grimm Campaign.

Marton wields a club which uses Dust to cause smokefields.

Vermillion Raddock fights using a 30-foot flail, combining the weapon with his own superhuman strength and reflexes in battle.

Abigail Pyre's weapon of choice is a scimitar with a similar design to Asher's Fortune's Fangs.

Edward Caspian wields a small buckler shield with a removable metal blade attached to it, and it has a gun mounted onto it. The shield is very durable, withstanding several blows from Bertilak's weapon.

Xanthe Rumpole's weapon is a spiked wheel that is kept hidden beneath her hair. The golden cord that keeps her braid bound is a part of the wheel, which she can use to spin and find at will. Rumpole can also use the cord to bind targets.

Her weapon can be a reference to Rumpelstiltskin, with her wheel and golden corde weapon being an allusion to the spindle wheel used by Rumpelstiltskin to turn the straw into gold.

Olive Gashley's weapon of choice is an awl pike which uses Gravity Dust to improve her attacks.

Slate's weapon of choice is a Hunting Knife.