The Wave was a crime family in Mistral located in Kuchinashi, known for dealing in stolen goods like Atlas Military technology and even magic artifacts.

After Lemon was killed in "When Life Gives You Lemons" and Huntsman reinforcements arrived in the city to retake it from the Wave, the organization has seemingly been disbanded.

The Wave was a relatively young criminal syndicate founded in the Kingdom of Mistral, operating throughout the continent of Anima and centered in the city of Kuchinashi. The Wave became infamous for their dealings of stolen goods, such as high tech Atlas Military developments, and similar merchandise. After obtaining a Magic Necklace, they have even started to sell magic artifacts found in the mountains to multiple factions to increase their influence outside Kuchinashi. Their rivals were the Hana Guild, an old criminal syndicate also centered in Kuchinashi that was originally known for dealing with narcotics.

The Wave also employed corrupt Huntsmen such as Team SMMK, paying the thugs to make sure that nobody had found the ancient ruins after Pastel's death. The Huntsmen became rivals to Team SAFR, who were investigating the rise of Grimm in the city as well as the Wave and the Hana Guild.

They also had multiple guards as security present after they took over the city's Sheriff's office as well as a weapon known in Mistral as a "Lotus Tank". Some members even dressed up like the old City Guard due to being in control of the city. Actual members of the city guard like Daff seem to have also joined the Wave following the takeover. Other Atlas Military technology the Wave had in their possession included an Atlesian air bomber ship and a stolen Atlesian Dust carrier ship.

At some point in the past, the Wave allied itself with the Mistral-based organization, Spider and it's leader, Lil' Miss Malachite, conducting a heist on an Atlesian shipment in the city of Argus, stealing a newly-created fabric material that adapted to light, making the wearer invisible. Spider stole the entire shipment underneath Wave's nose, thus invisibility cloaks became commonplace amongst Spider's spy network in Mistral.

Approximately 2 years before the start of RWBY, the Wave took an interest in Javi Pastel of the Pastel Company, who had discovered ancient ruins in the Kuchinashi northern mountain pass, and a powerful necklace which seemingly could control the Grimm. After Pastel made several deals with the Wave, the Hana Guild gained a new leader which stopped the dealing of narcotics and changed the organization into a more shadowy group. This caused Javi to stop his dealings with the younger organization before they could obtain the necklace.

Soon after, Pastel turned out dead as the Wave claimed the necklace from his estate before their rivals. The items on his estate went up for auction, and as such the organization sent their representative, Mina Lavender, to the estate. With all their enemies in one spot, the organization struck at the estate, controlling the Grimm into slaughtering their foes. Soon after, they turned to Kuchinashi, and began to reign terror in the city.

While the attack caused a lot of damage to Kuchinashi, it failed to get rid of all of the organization's enemies with there being rumors that the leader of the Hana Guild, Vermillion Raddock having survived the attack and later was revealed to have indeed survived. Some of the city guard decided to join the Wave following the takeover. Due to them also being in control of the city, they free Mina Lavender from jail. Later when Lemon finds out that Team SAFR are attempting to send a message for reinforcements to deal with the Wave, she sends a bomber plane to destroy the relay tower they were using to send the message. While the team destroy the bomber and save the people living around the relay tower, they have no idea if the message was successfully sent or not.

The Wave are later revealed to have multiple magic artifacts in their possession that they intend to sell to multiple factions outside Kuchinashi to increase their power and influence. They use the sheriff's office to keep some of them secure while they ship out mothers outside the city using trucks. Later when Team SAFR infiltrate the Sheriff's office with the former sheriff Alabaster, they managed to reach the evidence room where they were keeping the artifacts but end up alerting the guards stationed there when their distraction doesn't go as planned. Asher Mora and Arrastra Skye manage to enter the room, but Alabaster ends up locked out before he can enter and fights the approaching guards off while Asher and Arrastra fight a turret places in the room to protect the artifacts. They destroy the turret, but it ends up bringing attention outside the Sheriff's office and forces the Huntsmen to leave without Alabaster. Before they manage to fully escape however, The Wave send the guards from the station after them and use a weapon known in Mistral as a "Lotus Tank" to try and kill them. They manage to escape to the sewers thanks to Takaya's men after evading the tank.

Later when they ship out some of the magic artifacts to potential buyers in the city of Mistral, Team SAFR attempt to stop the trucks from leaving kuchinashi by attacking them. During their attack, they encounter Marton and Mina once again and prepare to fight them. After fighting them for a while, Lemon uses her magic necklace to control the Grimm in the area around the Convoys and prepares to attack Team SAFR with them. Among the Grimm being controlled are Sabyr's, Beringel's and even Lancer's. When Marton and Mina attempt to get out of the way of the Grimm army however, the truck they were on gets flipped over by the rushing Grimm as they pursue Team SAFR. Once the truck Team SAFR was using falls over a cliff, the Grimm eventually stop chasing them and leave.

Following this failed attempt, the Wave decided to send all of their remaining magic artifacts to the capital city by shipping them out using a stolen Atlesian Airship Dust carrier while also using controlled Grimm as extra security. Team SAFR also believe that Vermillion and the Hana Guild would also try to get their magic artifacts for themselves. After coming up with a plan to stop them with the help of their allies like Takaya's students like Taupe, Grayden and his men and Abigail Pyre and The Hearth, Fenix Nemean enters Kuchinashi's airport disguised as a tacco deliveryman and unexpectedly sees Daff again now working for the Wave.

After Daff tells Fenix why he joined the Wave and how he felt that he betrayed everything he once stood for, Fenix easily convinces him to help their cause to stop the Wave instead and helps Fenix out While telling him that Team SMMK's other members, Sil and Khaki, were also there for extra security. Fenix asked him if he could help them convince the city guard members that joined the Wave to also help their cause and said he would try to do so. After all infiltration groups get closer to the ship, Pyke's group ends up causing an explosion which alerts the Wave while Fenix runs into Sil and Khaki with Khaki almost recognizing him before the explosion happens. Following this, all groups begin to attack the Wave members stationed there as security while Sil tells the ship to take off with Lemon being inside. Right as he does however, Fenix takes control of a turret and shoots Sil. After Team SAFR managed to infiltrate the ship, Lemon tells all of the guards onboard to increase security.

During their infiltration of the ship Team SAFR fought against multiple members of the Wave and a Manticore and encountered Team SMMK in the room holding all of the Magic artifacts. After Pyke attacked one and set the room on fire in the process, Team SMMK take a Magic band and leave Lemon to fend for herself while using the artifact to teleport out of there. When Team SAFR finally reached Lemon's private quarters, they found that she was attacked by Abigail under orders from Vermillion and had her necklace stolen with Abigail taking control of the same Manticore that attacked Team SAFR earlier. She was later on the floor bleeding to death while telling Team SAFR not to let Vermillion get his hands on any of the artifacts for his own master as Fenix put her in her bed as the team left her to bleed to death.

After the stolen ship crashed, all of the Wave members still onboard were killed in the crash. Any of the remaining Wave members left in the city were defeated by the Huntsmen reinforcements sent by Leonardo Lionheart to help the city.

The leader of the Wave, Lemon 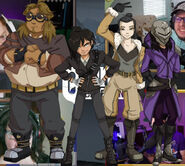 Daff, a former member of the Kuchinashi City Guard now working for the Wave

A brief look at Lemon holding the necklace