Image Gallery Quotes Behind the Scenes

Tyrian is a pale man with gold eyes and a brown ponytail braided to resemble a scorpion's tail. He wears a white sleeveless jacket with leather belts strapped to it, along with white pants. His jacket is left open, exposing his bare chest, which is crisscrossed with prominent scars. His arms are covered with cream colored bandages and leather vambraces. He also wears leather boots covering his entire shin with knee guards.

On each earlobe is a silver, ring-shaped earring, and near the top of his left ear is another matching earring.

In "Tipping Point", it is revealed that his animal trait as a Faunus is a scorpion stinger that protrudes from his back. When not in use, he disguises it by wrapping it around his belt. His eyes can also change color from gold to purple. The stinger is separated from the tail after Ruby Rose cuts it off with Crescent Rose. The remaining stump itself was temporarily attached to a metallic cap before the entire tail was covered with metallic plates and a prosthetic stinger was added at the end.

Occasionally, he appears in a dark brown duster jacket, worn open at the front. In Volume 7, a hood was added to it. 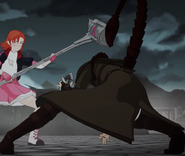 Tyrian's purple eyes when using his venom or Semblance

Organic tail with stub at the end

With coat and hood

Tyrian was described to his voice actor, Josh Grelle, as psychotic incarnate and someone who wants to see the world burn.[3] Tyrian appears to be a highly unstable, disturbed, maladjusted, manipulative, and outright sadistic individual. He frequently bursts into fits of uncontrollable, maniacal laughter and relishes in gruesome thoughts, such as the idea of removing one of Ruby's eyes in payment for her taking one of Cinder Fall's. His depravity is described in The World of RWBY: The Official Companion as someone who is irredeemable, fitting his fairy tale inspiration.

When Tyrian appears to have the upper hand in a fight he becomes overconfident and careless, letting himself take hits as long as he can continue to press the advantage. He also has a flair for the dramatic, wildly posturing and gesturing with deliberate dramatic pauses as if he were giving a stage performance. Another one of his eccentricities is sitting in a crouching position in his chair. Additionally, he is shown to be somewhat masochistic in nature, showing taking pleasure in cutting his own cheek with Thief's Respite.

Tyrian's instability is evident when he experiences an apparent mental breakdown after hearing he disappointed Salem in "Taking Control." Tyrian proceeds to cry in despair before viciously retaliating against a Beowolf that lunges at him, gaining a sadistic joy as he repeatedly strikes it dead. At times in Atlas, he displayed signs of paranoia, fearing people would be watching him until Arthur Watts assured him it wouldn't be a problem.

Tyrian is also observant and insightful regarding the character of others. He was able to deduce Mercury Black's predicament regarding joining Salem rather easily. Like his colleague, Cinder, he can also be manipulative. Notably, he used Qrow Branwen's anger against Clover Ebi to his advantage before killing the latter and framing Qrow in the process.

Tyrian's unbalanced, erratic and psychotic mindset also give him a great deal of tolerance to pain, as seen in "With Friends Like These" where he was able to dislocate/break his own thumb from its joint in order to slip out of his Gravity Bolas and then just as easily force it back into place without batting an eye; if anything, Tyrian seems to display sadomasochism and enjoys the pain. However, he is by no means immune to pain, this is particularly shown when he cries out in agony after his tail is severed in "Punished."

In "War", Tyrian is shown to be a nihilist as he gladly supports Salem's plan to destroy Remnant even if it means his own death, finding it a beautiful ideal to follow. In The World of RWBY: The Official Companion, Miles Luna adds that Salem is everything Tyrian yearns for, as his obsession with destruction is entirely personified in Salem.

While his psychotic traits may suggest otherwise, he is incredibly combat-efficient, is smart enough to know which targets to prioritize, and he has the forethought to hide his Faunus trait in order to get an advantage against RNJR. Tyrian's fighting style makes effective use of all five of his limbs, allowing him to engage multiple opponents at once with minimal difficulty. However, his style is not flawless, his chaotic mindset does leave him open to attacks from superior strategists, one of which results in the loss of his stinger, albeit after delivering a near-fatal dose of venom to Qrow.

Tyrian is extremely quick and acrobatic, able to dash behind an opponent and attack in the blink of an eye, being able to overpower Team RNJR without much effort. His fighting style relies heavily on offensive tactics, keeping opponents off-guard with relentless, lightning-fast strikes from his wrist blades, tail or feet.

Tyrian is shown to be quite strong and has incredibly fast reflexes, as even with his tail mutilated he is still powerful enough to send a Beowolf flying backward with considerable force with the damaged appendage and was able to easily avoid and catch all of Robyn Hill's arrows despite being shot at close range. His fighting style appears to be based on his nature as a scorpion Faunus, fighting much like a real scorpion through his weapons and tail, reacting quickly to enemy movements and can seemingly detect attempts to attack from blind spots such as his back, suggesting much like a real scorpion he can sense movement through vibrations in the ground.

Since he has no normal battle style he is nearly impossible to predict against in a fight, making moves that are absurd and chaotic which make him even harder to hit such as utilizing breakdancing moves in his fights against RNJR as well as Qrow, Clover and Robyn. According to Cinder, he is strong enough to kill fully trained Huntsmen which was proven true as Salem trusted him to eliminate Huntsmen in Mistral and held his own against Qrow, Clover and Robyn for a short time before he was captured.

Tyrian's weapons of choice are The Queen's Servants, a set of dual wrist blades resembling scorpion's pincers. These attach to his vambraces, and are equipped with light-caliber automatic firearms.

One of Tyrian's duties while working under Salem is the task of a tracker. This is seen where prior to being reassigned to hunt down Ruby and Team RNJR, Tyrian was primarily tasked to locate the Spring Maiden, who at the time was missing.

During his time hunting for Ruby, Tyrian is shown to be highly skilled at tracking down her location, as seen where despite only being reassigned to locate her a few days previously, Tyrian had already gotten the route Ruby was traveling in despite the vast size of Anima continent.

Furthermore, while threatening Emerald and Mercury in "Lost", Tyrian implies that even if the two manage to escape Evernight, he could easily hunt them down.

Tyrian also uses his stinger in combat, which he can contract and extend at will. The stinger is shown to be remarkably durable as it blocks Nora's attack, even when Nora was powered by her Semblance. Much like how scorpion stingers are usually a conduit for venom, Tyrian's stinger can inject venom when used as a barb, as seen when he grazes Qrow with it. The venom is potent enough to corrode stone and incapacitate someone simply grazed by his stinger within less than a day. After the battle against Qrow and Team RNJR, Tyrian lost his organic stinger after being bisected by Ruby, having to get it replaced by Arthur Watts with a prosthetic stinger.

Tyrian's Semblance, Aura Disruption, seemingly allows him to disrupt people's Aura. When activated, Tyrian's eyes and his arms glow purple, and the area of his opponent's Aura that he touches fades away, leaving the victim defenseless to a killing blow.