—The Warrior in the Woods

The Warrior in the Woods

The Warrior in the Woods is the titular character of a Fairy Tale of the same name. In the story, she was a Silver-Eyed Warrior who protected a village outside a jungle from the Grimm. She was killed by an unknown force, unsure whether it was Human or Grimm.

The Warrior in the Woods was a dark-skinned girl who had black frizzy hair with white streaks due to age and Silver eyes.

Originally, she wore a threadbare, tattered black cloak over a loose gray blouse that might have been white once, and her leggings that were covered in mismatched patches, these clothes having been unwashed and worn for a long time.

Over time, her hair grey more and more white and her posture became smaller. After being gifted new clothes by the boy she met in the jungle, the Warrior wore a clean white blouse with a black skirt, sturdy boots, and a dark green cloak. Her hair was pulled back into a ponytail.

The Warrior was a closed off and lonely person, maintaining a high sense of justice though not seeking any glory or admiration for her work. Despite not being a very social person, disliking most people, the people she did like gave her hope for Humanity, leading her to choose to preserve life rather than destroy it.

The Warrior had a nonchalant, friendly relationship with the boy she met, being grateful for the gifts he brought her. Still, out of a sense of protecting him, she told him to stay away from her.

In the fairy tale as recorded by Glynda Goodwitch, the Warrior was a lonely vigilante who protected a village on the edge of a lush jungle from the Grimm. She was first encountered by a boy who had decided to venture deep into the woods during a game of hide-and-seek, going deeper into the jungle than anyone ever had before. The boy was attacked by a Boarbatusk, only to be rescued by the Warrior. The girl told the boy to go home and not mention her appearance, and disappeared into the trees without telling him what her name is.

One year later, the boy was once again attacked by a Grimm, only to be once again saved by the Warrior as she killed the Beowolf. This time, however, he was prepared with a dagger to defend himself and a gift for the warrior: new clothes. The woman accepted the gift and left with a warning that the next time he was on his own.

Another year later, the boy was now a young man who had grown slightly accustomed to combat. He is attacked by three Owl Grimm. He is once again saved by the Warrior, who blasts away an Owl Grimm with her Silver Eyes. The man had brought food and a newly forged weapon for the Warrior, hoping to have seen her again. The two ate together, and the girl explained she had lost her family to other Humans in her time, and instead chose to preserve life rather than end it.

By the next year, the village had expanded and the forest shrunk as a result, as such the Grimm grew closer. The boy found the Warrior’s hut, only to find that it was empty and the Warrior in the Woods was gone, having died alone by some force– whether Grimm or Human he wasn't sure. The boy regretted not being there with her, having fallen in love with her Silver Eyes the first time he saw them.

According to Ozpin, The Warrior in the Woods is superficially a cautionary tale discouraging children to stray far alone, or relying too much on others to save them. However, it is also an inspiring tale to help others in any way you can.

The Warrior was born with Silver Eyes, which allow her to project bright white light from her eyes that is lethal to the Creatures of Grimm. She is first seen using her Silver Eyes to turn a Boarbatusk and an Owl Grimm into dust.

The Warrior's weapon of choice was an old steel billhook whose handle was broken over time. Covering the handle, the Warrior tied a red ribbon on the weapon's edge, giving it color and vibrance to the otherwise aged weapon. After the billhook's handle snapped off, she began to dual wield both broken halves, having sharpened part of the handle as a stake.

The Warrior was later gifted a new, sturdy billhook by the boy she met in the jungle, now a young man. He later found it in her hut after it had been destroyed, and used it as his weapon. 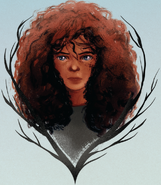 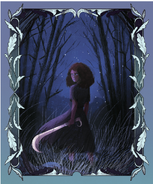 Retrieved from "https://rwby.fandom.com/wiki/The_Warrior_in_the_Woods?oldid=1134880"
Community content is available under CC-BY-SA unless otherwise noted.