"The Mystery Bunch" is the forty-first episode of RWBY Chibi and the seventeenth episode of Season 2. It premiered on the Rooster Teeth website on September 2nd, 2017 for FIRST members. It was reuploaded on Youtube on October 24th, 2020, together with episode 39, "Nurse Nora".

"Rolling Thunder" - In which Sun Wukong boasts about his superior rollerskating skills to Jaune Arc, Lie Ren and Neptune Vasilias until Ruby Rose runs over his tail.

"Computer Virus" - In which Ozpin, Peter Port, Bartholomew Oobleck and Winter Schnee wonder about their computer catching a virus whilst a sick Penny Polendina walks by.

"The Mystery Bunch" - In which Team JNPR and Zwei imitate a certain group of crime solving teenagers.

Jaune Arc, Lie Ren, Neptune Vasilias and Sun Wukong are roller skating. Sun is rolling around easily, while Jaune struggles just to stay upright and Neptune is hunched over trying to stay balanced.

Sun: It's true what they say, you never forget how to roller skate.

Jaune: Who says that?

Sun: Dudes who don't fall down.

Jaune loses his balance and starts to fall, so he grabs onto Ren's arm for stability.

Ren: Do you mind?

Jaune: Please don't make me let go; I'm tired of always being the first one to fall down.

Ren: (facepalms) Fine, but no hands below the waist.

Neptune does a muscle man pose and begins to slowly roll off to the right.

Neptune: Hey, this isn't so bad. I think I can do this!

Sun: On your left, dude!

Sun skates past Neptune, causing Neptune to spin out of control and fall over; he grabs Ren for stability as well.

Neptune: Wow, I feel so safe holding onto you. You're like a rock.

Ren: Okay, That's enough of that.

Ren throws Neptune and Jaune off of his arms, causing them to fall. He loses his own balance and falls over a moment later.

Sun: Guys, please, you're embarrassing yourselves.

Jaune: How do you make it look so easy?

Sun: Uh, duh, my tail helps me balance! It's pretty much the best thing about me; other than my abs. And charm. And natural Beau-keeeeh

Ruby Rose skates past, running over Sun's tail before he can finish his sentence. Sun's pupils narrow to pinpricks, his tail bent at an odd angle behind him.

Ren: You were saying?

Sun makes a victory pose, eyes closed and with a pained smile as he slowly rolls off to the left, out of sight. Jaune grunts and wheezes before falling unconscious with spiral eyes. Ren shakes his head in disappointment.

Winter Schnee, Bartholomew Oobleck, Ozpin and Peter Port are standing at a desk, looking at a holographic monitor which shows a skull and crossbones. In addition to the skull, the word ERROR flashes in red block text. It opens its mouth and two popups appear: "COMPOST KING. PLAY NOW" and "You can become a JUNIOR DETECTIVE! JUST THREE EASY PAYMENTS!".

Ozpin: I just don't understand what could have given us a computer virus like this.

Penny Polendina walks by the desk carrying a couple of books. She stops and sneezes, after which the skull on the monitor begins to cackle loudly and spew out more popup ads: a poster of the Achieve Men; "REAL CHIBI BEANS" endorsed by Professor Oobleck calling them "MAGNIFICENT!"; "NEO'S NEO ICE CREAM" advertising the new flavor "TORCHWICKY" and assuring that it's not poison; "JARS BY CINDER" showing a couple cremation jars with the logo "STORE YOUR FRIENDS"; "WHACK-A-GRIMM. PLAY NOW!"; "KITTEN KILLER 9000. ORDER NOW!"; "NUTS & DOLTS COMPUTER REPAIR"; "ARMY SURPLUS" endorsed by "SHOPKEEP, INC."; "READ LIKE ROSES BOOK CLUB"; followed by several repeats of the ads. Winter stares at Penny, with a mix of both confusion and concern on her face before looking up at the screen, eyes wide.

A teddy bear wearing a wig of Ruby's hair is sitting in a chair in an interrogation room; behind the chair is an eyewitness window with a two-way mirror.

Neptune: Alright you, this is your last chance! (manhandling the bear) Confess! Or I'll beat the stuffing out of you.

Sun bursts into the room. Neptune looks embarrassed and throws the bear away from him after trying to hide it behind his back.

Neptune: (defensively) What? You play with dolls! I don't.

Sun: Dude, focus! I just found out someone else has been solving mysteries in town.

Neptune: But that's our thing. We're the junior detectives. Who's trying to muscle in on our turf?

Sun: They call themselves The Mystery Bunch.

Neptune: Is this... some kinda weird cosplay?

Ren: Hmm, has anybody seen a mystery around here?

Pyrrha: I'm sure we'll stumble across one completely by accident.

Jaune: (rubbing his stomach) I could go for a ridiculously large sandwich. Also, G-g-g-g-g-g-g-g-g-grimm!

A Beowolf appears and roars, causing Zwei to jump into Jaune's arms.

The Mystery Bunch run in place until the Beowolf attempts to grab Ren, at which point they sprint off on the opposite direction.

Neptune and Sun watch the events in the hallway.

Neptune: So wait, what does this accomplish?

Sun: I'm not sure, but it's like ninety percent of what they do.

Zwei runs out of the second left door. Ren is riding on his back, holding onto his ears. Pyrrha is standing on Ren's back, hunched forward while Jaune is haphazardly sitting on Ren's head and leaning back against Pyrrha. Nora, now carrying the Beowolf, follows them out of the door.

Having successfully caught the Beowolf, Jaune is now eating from a box labelled Zwei Snacks while the groups stands around the Beowolf, which has been tied up with rope.

Ren: Now, let's get to the bottom of this mystery.

Shopkeep: (mumbling) And I would've gotten away with it, too, if it weren't for you meddling kids.

Pyrrha: (patting Shopkeep's head) Another case solved with a minimum amount of effort.

Nora: I have glasses!

The Mystery Bunch all laugh heartily.

Sun: (mouth full, holding a box of Zwei Snacks) I dunno, dude, just keep eating dog food until we get on their level.

What are you doing here, Qrow Branwen? 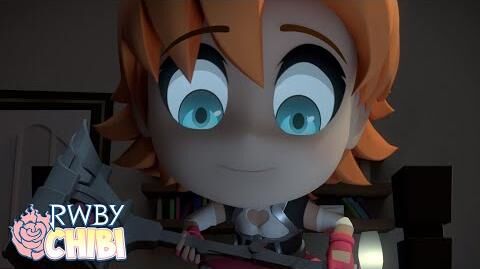 Retrieved from "https://rwby.fandom.com/wiki/The_Mystery_Bunch?oldid=1147526"
Community content is available under CC-BY-SA unless otherwise noted.