Team SAFR (Sapphire) is a team of Huntsmen in Mistral, active in Kuchinashi. The team is composed of Arrastra Skye, Asher Mora, Fenix Nemean, and Pyke Rite. They are the protagonists of RWBY: The Grimm Campaign.

The team was assigned by Qrow Branwen to investigate the rise of Grimm and the criminal empires of Kuchinashi two years prior to the start of RWBY. During their investigation, they fought against the Wave gang who temporarily took over the city for about two weeks and Team SMMK, a group of corrupt Huntsmen hired by the Wave to stop their investigation until they abandoned their employer.

They also became enemies of the Hana Guild and later Abigail Pyre, an old acquaintance of Asher's after she revealed that she was hired by Vermillion Raddock to kill Lemon and retrieve her Magic artifacts. After sending out a message to receive help, the city was retaken from the Wave thanks to Huntsmen reinforcements sent by Leonardo Lionheart while chasing off the Hana Guild in the process. 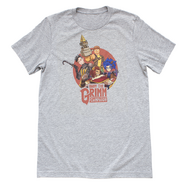