Team RWBY killed the Nevermore and completed their initiation

"Team RWBY vs. Nevermore" is a conflict that occurred within the Emerald Forest during "Players and Pieces", where Team RWBY fought a large Nevermore that had prevented them from leaving the forest with their relic and completing the initiation for Beacon Academy.

The Nevermore is first introduced when Ruby Rose and Weiss Schnee decided to use the giant Grimm to help locate the temple where the relics are kept.

Upon finding the temple, they promptly jump off, landing in the vicinity of the temple. There are multiple minor conflicts with the Nevermore before the members of the would-be Team RWBY finally stand together to finally put the creature down.

Initially, both teams had been working together to fight the Nevermore along with the Death Stalker. It is only when Blake Belladonna is accidentally knocked off the bridge by Nora Valkyrie does the real fight between Team RWBY and the Nevermore begin.

After being pushed off a broken bridge by Nora Valkyrie, Blake uses the kusari-gama mode of Gambol Shroud to stab part of the ruins and use it to swing herself through the air. Seeing an opportunity, she guides herself towards the Nevermore that is currently flying by.

Before landing on the Grimm's beak, she grabs Gambol Shroud's cleaver-like sheath. She uses her Semblance to propel herself forward in mid-air and strikes at the creature's head using the cleaver. She then runs down the length of its body while slashing at it multiple times. Once Blake reaches its tail, she leaps off the Nevermore and lands on a platform beside the rest of her team.

As the Nevermore makes another round toward Team RWBY, they all prepare the long-range abilities of their weapons and fire as many projectiles as they can at the Nevermore. However, it does very little damage, and the bird crashes straight through their position. As the ruins crumble around them, Team RWBY has to find footing on the falling debris and get themselves to a stable point up higher. Taking note of the others' landing strategies and weapons, Ruby comes up with a plan.

Yang Xiao Long begins firing multiple shots at the Nevermore, gaining its attention. When it gets close enough and opens its mouth, Yang leaps and lands in its open mouth. Holding its beak open with one hand, she unleashes a barrage of shots into the creature's mouth. Once the Grimm starts to lose its balance, she leaps off as the creature continues forward and crashes into the cliffside.

When the Nevermore has started to regain its composure and begins to ascend again, Weiss dashes forward and uses Myrtenaster to freeze its tail to the ruins below it. Meanwhile, Blake and Yang use Gambol Shroud to create a slingshot by wrapping its kusari-gama form around two adjacent pillars.

Ruby stands on top of Crescent Rose and jumps onto the slingshot, drawing it back. Weiss, who had by then regrouped with the others, uses one her of glyphs to keep Ruby in place on the drawn ribbon. With precise aim, Weiss releases her glyph's hold on the ribbon, sending Ruby catapulting through the air.

Continually firing her weapon to maintain momentum, Ruby guides Crescent Rose to connect with the Nevermore's neck, pinning it against the cliff. Weiss then creates a series of glyphs that run up the length of the cliff, allowing Ruby to maintain footing on the vertical surface. Dragging the Nevermore by its neck up the mountain, firing shot after shot, Ruby concludes the onslaught and the fight in general by simultaneously pulling on Crescent Rose and firing one last fatal round at the top of the cliff, viciously decapitating the Grimm.

Blake strikes the Nevermore after jumping off of a shadow clone.

Mytenaster's ice pins the Nevermore to the ruins.

Weiss and Ruby prepare for the final assault.

Ruby flies through the air towards the Nevermore.

Ruby drags the Nevermore up the cliff.

Ruby beheads the Nevermore.
Add a photo to this gallery 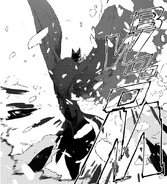 Add a photo to this gallery
Retrieved from "https://rwby.fandom.com/wiki/Team_RWBY_vs._Nevermore?oldid=1115263"
Community content is available under CC-BY-SA unless otherwise noted.