Sparky (by The Mirage Announcer)

Sun Wukong is a student from the Kingdom of Vacuo, who later moved to Mistral and attended Haven Academy before transferring to Shade. He is a Faunus and the leader of Team SSSN, making his first appearance in the episode "The Stray" of RWBY Volume 1. Sun's weapon is a collapsible staff that separates into two pairs of nunchucks made of guns called Ruyi Bang and Jingu Bang.

Sun is a tan-skinned boy with short spiky light-blonde hair and dark-gray eyes in Volumes 1-3, but as of Volume 4, his eyes are blue. He wears two red wrist bracers over black fingerless gloves and an open loose-collared white jacket with no shirt underneath, displaying his muscular physique. He also wears blue cargo pants tied up with a white belt. He wears white bandages on his legs and has a chain hanging from the belt loop on the right side of his pants.

He sports black and yellow sneakers and wears a twisted golden necklace around his neck, replaced by a black cord in Volume 2, with a round pendant bearing his monkey emblem. As a result of his Faunus lineage, he has a long prehensile monkey tail the same color as his hair. Sun hides his weapon under the back of his shirt.

In "Of Runaways and Stowaways", Sun wears a brown-hooded cloak while following Blake Belladonna to Menagerie. He abandons the cloak while fighting the Sea Feilong with Blake and the ship. In the concept art, this outfit is called "Stealth Sun".

Sun's "disguise" from Painting the Town

Prom suit from Burning the Candle and Dance Dance Infiltration 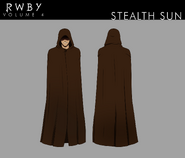 Stealth outfit from Of Runaways and Stowaways

In his first appearance, Sun is shown to be fun-loving and mischievous, with little regard for the law – stowing away on a ship, thanking the crew for the ride during his escape, throwing a banana peel in a detective's face, and stealing apples. He has a lot of self-confidence, referring to himself as a "great stowaway". He also has a strong crush on Blake.

In conversation, Sun is very laid-back and casual. This translates to his choice of clothing – he heavily dislikes wearing formal attire. He is also very kind and patient and – in great contrast with his usual comedic demeanor – often demonstrates wisdom beyond his years, readily offering good advice when needed. When first meeting Blake, he is willing to listen to her story and waiting for her to open up for nearly two days, bearing with her "small talk and weird looks". He is not afraid to give his opinion and has a dislike for those who regard themselves as "holier than thou" or "use force to get whatever they want", such as the White Fang viewing them as nothing but a bunch of bullies.

Sun also seems to be willing to help others, regardless of whether he is asked or not, even if he barely knows them. In "Black and White", he goes out of his way to help Blake, whom he had just met and barely knew. This quality is further demonstrated when he readily volunteers to help Team RWBY with their investigation, despite both Blake and Ruby Rose stating their opposition to his involvement. In a Cameo interview, writer Miles Luna has stated that he thinks Sun is "a good guy with a good heart". He admits that although Sun "sometimes doesn't always think things through and is very reactionary with his feelings and actions... he's a well-meaning character". [3]

He also does not like it when people dear to him have to risk their lives; he shows great opposition to Ruby and Weiss Schnee endangering themselves to search for Jaune Arc and Pyrrha Nikos during the Grimm attack on Beacon Academy. However, Sun is willing to put himself in harm's way for those he cares for.

In Volumes 4 and 5, Sun persistently remains at Blake's side and continues to try to help her in any way he can. He expresses wisdom in pointing out that Blake's friends want to fight for her, and that she should not try to distance her friends because she feels responsible for bringing harm to them. He begins to personally take Blake's campaign against the White Fang to heart, believing it's the right thing to do and wholeheartedly pursuing the same ends. In that respect, Blake believes Sun to be the embodiment of the word "earnest".

Sun is shown to be a poor leader to his team, as noted by both Scarlet David and Coco Adel, he is often shown to be easily distracted and has a chaotic and unpredictable nature. Even Sun himself appears to be fully aware of this flaw, as he, in his own words, admits to Blake that he's "the worst team leader ever". Following the events of Volumes 4 and 5, Team SSSN is shown to have strained their relationship with Sun, angry at him leaving them yet again.[4] Scarlet also criticizes Sun for being both "noble and selfish at the same time," as seen when he abandoned his team in pursuit of Blake.

Unlike others, Sun likes to move around often so that he doesn't get attached to people or places. To him, long periods of sitting around and stretching have been more punishing than relaxing for a long time. In part, this is why he had moved to Mistral, due to being tired of Vacuo. Sun himself claims to enjoy being bossed around by strong women.

Sun has been shown to be quite athletic, relying on parkour for mobility. He is capable of jumping large distances and can utilize his tail as an extra appendage. He was able to leap off a building, land on Roman Torchwick, and then perform a front handspring and a front-flip before coming to a stop.

Sun is capable of jumping large distances between cars and still being able to move without losing his balance. Sun also possesses night vision, which is a common trait amongst Faunus. In "Painting the Town..." he manages to find and escape out a window with Blake after she cut the power at a White Fang meeting. In the battle against the Sea Feilong, Sun uses three of the clones from his Semblance to launch Blake hundreds of feet into the air, yet seemingly made the same distance himself with one jump.

Sun is also a very skilled climber, claiming to climb trees all the time and having done so to reach Team RWBY's dorm room, which is implied to be several stories above the ground.

Sun seems to be highly adept in martial arts, able to fend off many members of the White Fang single-handedly without taking a hit and using his tail as an extra appendage during combat.

Sun's weapon of choice is Ruyi Bang and Jingu Bang. He is exceptionally skilled with his weapon, which has two forms, in its staff form, every hit triggers a small explosion and it is able to deflect projectiles and blasts while spun quickly in a defensive stance. Sun is also able to emit a shockwave by slamming his staff to the ground. Sun's use of his staff is similar to the Japanese martial art Bōjutsu, which is a form of martial arts that uses a bō staff.

While his staff is in its secondary "gun-chucks" form, he is able to fire shots at his enemies from both weapons simultaneously, with bullets similar to those found in Ember Celica. This lets him keep a steady barrage on his opponent with at least one weapon at any given time without losing the ability to defend himself. He appears to have above-average strength, being able to send multiple White Fang members flying with a sweep of his staff. This may be attributed to his Faunus heritage. He also has above-average speed and endurance, such as being able to run constantly without showing signs of fatigue, as was the same in his fight with Roman. Sun's use of his "gun-chucks" is similar to the martial arts Eskrima.

Sun's Semblance, Via Sun[5], allows him to create and control glowing yellow clones of himself. He needs to remain still and concentrate while using his Semblance.[6] His clones are tangible enough to interact with people and objects and even have enough strength to pin an opponent or lift heavy objects.

In "Two Steps Forward, Two Steps Back", it is shown that over-use of his Semblance can be taxing on his Aura, when he uses four clones to hold down a struggling Ilia Amitola. As a result, she is able to injure him after his clones dissipate.

Sun's Semblance works as an extension of his own consciousness, in which he can sense and feel what his clones do as well. As a result, he is susceptible to mental attacks through his clones, as shown by when Yatsuhashi Daichi breaks the mind control on Sun by using his own Semblance on a clone.[7]