View source
watch 01:48
Who is Summer Rose?
Do you like this video?
Play Sound

Summer Rose was Ruby Rose's mother and was the leader of Team STRQ. Her gravestone is at a cliff in the Cliffside Forest.

It is revealed in "Burning the Candle" that Yang Xiao Long is Ruby's half-sister, making Summer Yang's stepmother. Summer is believed to have died prior to the start of the series, and in "Gravity", it is implied that Summer faced Salem at some point before her disappearance.

According to Yang, Summer was a highly-skilled Huntress. She was a member of Team STRQ alongside Taiyang Xiao Long and the Branwen twins, Raven and Qrow Branwen, serving as the team's leader. Yang describes Summer as a "super mom" and still fondly remembers her cookies.

Ruby appeared to be almost the spitting image of Summer, having the same silver eyes, fair complexion, and graduating black-into-red hair. In "Our Way" as part of her daughter's flashback, she had shoulder-length hair tied back in a half-up/half-down style and wore a hooded cloak which is white outside and red underneath. Under that cloak is a similar outfit to her daughter's but mostly black: a high-neck décolletage blouse with studded wristbands on the arms, a black and white overbust corset, a skirt with white tulle underneath, gray leggings, and knee-high boots with red soles.

In a photograph of her in her younger days with Team STRQ, Summer's face was partially obscured by her cloak as well as much of her outfit aside from part of a black pleated skirt, which was similar to her daughter's style. In comparison to the rest of her old team, she appeared to be the shortest.

Summer, as she appears in Ruby's memories 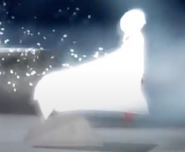 Younger Summer as depicted in a photograph

Yang described Summer at best as an attentive mother to both her and Ruby. Summer cared deeply for Ruby and Yang, regardless of the latter being her step-daughter. In "The More the Merrier", Raven notes that Ruby shares some ideals with Summer, believing in working together to beat Salem, stating that, "You sound just like your mother."

In "Pomp and Circumstance", when Ruby asks what her mother would've done had she learned the truth about Salem, Qrow tells her that he believes Summer would've pressed on, like her. He describes Summer as "always the best of us", but also claims that she could be a bit of a brat sometimes. The earlier notion was further proven by Salem who claimed Summer told her she would stop her despite her immortality, as Ruby spoke similar words to her image in Atlas.

Summer was a skilled Huntress, graduating from Beacon Academy, and going on missions until her presumed death. In addition to being a "Super-Mom", Summer was described as a "slayer of giant monsters" by Yang. According to Qrow, she and her team were rather well-known during their time at Beacon, suggesting a similar reputation and record of accomplishments as Team RWBY. She was apparently skilled enough for Salem to have to deal with her herself, as Salem hinted that the two of them had fought sometime before her death.

Summer, and by extension her daughter Ruby, comes from a line of warriors who possess powerful abilities related to their Silver Eyes. The extent of their power is unknown, but according to an ancient legend, those with Silver Eyes were destined to be warriors, and the Grimm feared them. It is gathered that Silver Eyes are capable of blinding, petrifying and even disintegrating Grimm. As she has not been seen using them, it is unknown how skilled she was with them.