The Beast from Beyond the Stars

Starro is a character who first appeared in RWBY/Justice League as the main antagonist of the comic series. He is based on his DC Comics counterpart Starro the Conqueror.

Starro is an enormous five-limbed alien starfish. Being largely navy blue in color, Starro has as a singular huge, red eye. He has bright yellow and magenta markings.

Not much is known of Starro's personality, though he appears to exist for the sole reason of spreading his own power throughout the universe, being a conqueror at heart. He appears to be an extremely intelligent being, understanding the need for powerful Semblances to fuel his army, and having a strategic mind to slowly grow in his own power rather than be blunt about his intended rule.

Starro is able to take advantage of any situation he is in, such as when Jessica Cruz uses her powers to capture the brainwashed Team JNPR. He was also able to brainwash Jessica to serve him and turn against her friends by making her project their own traumas against them.

Through the use of star-shaped emblems which serve as masks, Starro has the ability to control mankind, Grimm, and animals. This appears to work regardless of Aura, as it has taken hold of Team JNPR and James Ironwood. It is also shown to work on someone like Jessica Cruz, who is not from Remnant.

An enemy of Jessica Cruz, Starro is a conqueror being from another world who arrived in Remnant nearly two decades ago when attempting to escape from the Guardian. Since then, Starro has begun to secretly to grow his power and hold over Remnant, interested in extremely powerful Semblances.

Slowly influencing the minds of beings, Starro's mind control eventually affects Beacon Academy, taking over the minds of every Huntsman in the region with the exception of Team RWBY and Ozpin, who coordinate with the Justice League to fight back against the enemy. Later, he assumes command of the Atlas Military by taking hold of James Ironwood, thus securing an army for himself.

With the help of the Justice League, Jessica and Team RWBY eventually figure out that Starro is hiding in the depths of the ocean. After resting in Atlantis, they soon learn Starro has aligned with Mr. Lloyd and the two plan to take their forces to a harbor in Atlas.

Given how none of Team RWBY or most of the Justice League can fight in deep waters, the team hatches a plan to defeat Starro. Diana Prince, being one of the few who can survive underwater, attacks Starro without being alerted due to being an Automaton, who does not register as human. With that, Arthur Curry and Blake Belladonna draw Starro's forces to battle, where Cyborg disables them with his technomancy Semblance. As the fight between Starro's forces and the Justice League wages, Starro calls on Team JNPR to provide himself aid.

Starro later captured and brainwashed Jessica as one of his strongest pawns against Team RWBY and the Justice League. He is eventually crushed by a Dust Hanger building from Clark as a last resort to defeat him.

Starro, nearly defeated by the explosion, appears on the coast. Weakened, he loses his hold over most creatures he had mind control over. Still under mind control, Team JNPR attempts to defeat Team RWBY briefly before their mind control fades. Starro attempts one final assault, facing the entirety of the Justice League, RWBY, and JNPR, only to fail. With the alien defeated, Jessica imprisons Starro and leaves to seal him away for good as the heroes aid survivors and celebrate their victory.

Starro is trapped in space, but he can still be seen in Remnant's atmosphere as a star in the distance.

Chapter 11: The War of Wills 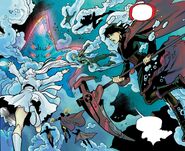 Starro sending help from his minions.

Starro gets weaken from Clark's attack.

Community content is available under CC-BY-SA unless otherwise noted.