Solitas[2] is the northernmost continent of Remnant on which the former Kingdom of Atlas was located. Within the Kingdom was the City of Atlas, based around Atlas Academy, as well as the city of Mantle, the former capital of the Kingdom.

Solitas has a cold climate, which makes it mostly inhospitable to both Humans and Grimm. It's described as easy to get lost in, especially in its tundras. In certain areas, forests such as the Snowbound Forest are capable of growing. Wildlife amongst in Solitas is shown to include prize deer and penguins.

Auroras, or polar lights, are often seen in the night sky of Solitas.

Over time, the Creatures of Grimm grew to adapt to the cold of Solitas, now said to be the strongest species of Grimm.[3] However, the Grimm adapted at a supernaturally fast rate, leading many to wonder the cause of this change.[4] Grimm that adapted to this climate include the Megoliath and Sabyr, amongst others.

After the Kingdom of Atlas was destroyed, the continent was mostly abandoned with the majority of its residents using a passageway to evacuate to Vacuo. 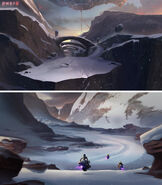 Concept by Scott Zenteno
Add a photo to this gallery

The Snowbound Forest
Add a photo to this gallery

Retrieved from "https://rwby.fandom.com/wiki/Solitas?oldid=1184189"
Community content is available under CC-BY-SA unless otherwise noted.