For the World of Remnant episode of the same name, see Schnee Dust Company (WoR episode).

The Schnee Dust Company (SDC) is a corporation owned by the Schnee family, and is one of the largest producers and exporters of Dust in the world of Remnant. Whitley Schnee is the current heir to the company, which was founded by his grandfather.

As seen in the "Black" Trailer, the Dust is transported by railway lines, as well as by sea, as seen in "Black and White", after being mined and refined at quarries. According to Blake Belladonna, the company is known for its "controversial labor forces and questionable business partners", implying a bad reputation and/or criminal undertakings. The company has a history of bloodshed with the White Fang. However, the reasons behind this conflict are currently unknown.

It is headquartered in the Kingdom of Atlas and collaborates with the military under General James Ironwood on weapons such as the Atlesian Paladin-290. The company also has operations in Vacuo, which may have contributed to the environmental deterioration of that Kingdom.

The Schnee Dust Company was founded by Nicholas Schnee in the aftermath of the Great War, in the kingdom of Mantle. Nicholas personally led numerous expeditions around the world to find Dust veins, earning him praise and respect throughout the Kingdoms, while also greatly expanding his company. However, as time passed Nicholas began to grow weary. His family missed him and his health was failing. He was convinced by his son-in-law, Jacques Schnee, to let him inherit the company. Under Jacques' leadership, the Schnee Dust Company's profits grew exponentially, albeit through less-than-ethical practices, such as the use of cheap labor, allowing dangerous working conditions, possible monopolies and having shady business partners.

The Schnee Dust Company and the Schnee family are currently at war with the White Fang. In "The Stray", Weiss Schnee mentioned that some of her family members and friends have disappeared, while several company board members may have been executed. One instance is mentioned wherein a train car full of Dust was stolen. Due to this conflict and the temper her father had in regard to it, Weiss experienced a difficult childhood. This caused her original hostility toward the White Fang and her distrust of Faunus in general.

The Schnee Dust Company's controversial labor forces, mentioned by Blake in "The Shining Beacon", are evidently Faunus. In "Black and White", Blake mentions that the White Fang hijack cargo from companies that use Faunus labor, which is the exact event that took place in the "Black" Trailer. Weiss confirms this in "Mountain Glenn", saying that her father's business practices are no longer progressive in terms of labor rights and Faunus treatment. Upon inheriting the company, she wishes to find a way to change that.

In "Remembrance", it is revealed that General Ironwood had previously placed an embargo on Dust trade until the threat of war passes. Jacques took great exception to this and its consequences for his company, though he tried to pass it off as being concerned for the Kingdom.

After Jacques is arrested in As Above, So Below and his crimes of having assisted Arthur Watts in sabotaging Atlas and possibly getting scores of citizens killed in Mantle, all of the staff at the Schnee Manor quit and abandoned the Manor, implying that the rest of his workers in the company have done the same or at least left the company in a highly precarious situation.

As one of the biggest and most influential Dust trade companies in Remnant, the SDC has various businesses, sub-branches, connections and projects all over the world ranging from simple small-time Dust distribution shops to major mining operations to paramilitary operation in all of the continents of the world.

Atlas is the kingdom where the SDC first began as it is the Kingdom where its founder and first CEO, Nicholas was born and raised in, it was also within the continent of Solitas were Nicholas first found his first major Dust depository and where he eventually founded the first early incarnation of the SDC. As such the company's home office and main headquarters have also been confirmed to be located within the Kingdom's capital city.

Nicholas' daughter and grandchildren are also currently living within the Kingdom along with his son-in-law, the current CEO, Jacques within the Schnee Mansion in the Capital. With the family being one of the Kingdom's most prominent figures in both the Kingdom's elite and lower classes.

The SDC's immense influence is seen in the fact that a majority of the kingdom's citizens are heavily reliant on the company for their livelihood, as a majority of its citizens have jobs working in the companies operations and subsidiaries, as seen during the events of "Sparks" where due to Jacques attempts to win the election by promptly shutting down the "non-essential" SDC operation in Mantle in order to "preserve" his business due to the Dust embargo employed by Ironwood. That thus then causes nearly all of the cities citizens to lose their jobs while the rest found themselves unable to access the company's Dust supplies that is essential for their survival, which thus then caused severe civil unrest and mass rioting all over the city.

One of the SDC's major operations and main source of income within Atlas seems to be within the Mining industry, with the company having several large scale mining operations and owning several Dust mines used in order to dig out and processing Dust for both selling and providing the Kingdom with a steady supply of the mineral for the general public's everyday usage. The SDC also works closely in partnership with the Atlesian Military by providing them with Dust for technological development in weapons such as the Atlesian Paladin-290. The SDC also utilizes their mined Dust in exportation to the other kingdom's of Remnant as their main source of industry in the kingdom. The SDC also possess an abandoned mine that was shut down due to a disastrous incident where Faunus miners had accidentally tripped while handling agitated Dust crystals and causing a explosion which then triggered a chain reaction, effectively rendering the Mine to unstable and leading to it being closed down and abandoned and due to the expulsions and subsequent cave-in, several Faunus laborers lost their lives in the disaster.

Another facet to the SDC's power in Atlas is the fact that the SDC is currently running in partnership with the kingdom in providing both Atlas and Mantle with heating, with the company and the kingdom working together in maintaining the major cities heating grids to protect its people from the lethal cold of Solitas. However, it was also shown that the SDC also possess the authority to actively shut off the heating grid should they choose to as seen where Arthur Watts took advantage of Jacques' high authority clearance over the company and kingdom to shut off the heating in Mantle while leaving Atlas' own grid untouched in order to foster further anger and hatred towards the high class of the kingdom and incite further chaos.

In Mantle, the Schnee Dust Company owns Snow Shoe Shipping[1], a subsidiary used to refine Dust and provide it to Atlas city through the use of pneumatic tubes. Snow Shoe has since bought AK-200 drones to report to the company, which as such do not report to the military.

Although not exactly shown or seen, it has been implied that one of the major contributions to the kingdom of Vacuo's ecological degradation and destruction of the once bountiful oasis and jungles is due to the SDC's heavy presence in the continent. The company itself seems to have several excessively large and ecologically harmful Dust mines and factories that have uncontrollably exploited and mined the kingdom's immense Dust reserves that eventually lead to the kingdom's current barren desert-like terrain in stark contrast to its previous oasis of resources.

SDC seems to be one of the Kingdom of Vale's main source of Dust exportation, as seen when the majority of Dust shops and crates shipped to the kingdom possess the Schnee family/company logo on it.

During the events of Volume 1, the criminal mastermind Roman Torchwick initiated several Dust robberies on the entirety of the Dust Shops all over the kingdom's capital city of Vale and has even gone as far as robbing the main source of Dust shipments within the cities main docks, where he successfully took a gigantic amount of Dust shipments from the Kingdom of Vale, which eventually lead to the kingdom entering an economical crisis within its local Dust industry. As stated by Roman himself that due to his large scale operation, the prices of Dust had been severely inflated and increased to nearly unaffordable levels and due to him taking the majority of Dust supplies, the local military of the kingdom has barely enough Dust for their own usage, effectively weakening the kingdom's defenses.

Due to the fact that the SDC was the main source of Dust exportation to Vale, it's likely the gigantic lose of their Dust shipments caused a severe loss of income and profit for their business and the company were likely the ones responsible for inflating the Dust markets prices in order to attempt to rectify the issue.

Although the exact official relationship the Faunus nation has with the SDC is unknown.The SDC's presence in the kingdom seems to be the smallest in the entire world, as seen where it was shown that the company barely possess a presence in the City, likely due to the people of Menagerie's own unpopular opinion of the SDC due to its controversial Faunus Labor employment and treatment and the likely chances that the people of Menagerie themselves originally came to live in the kingdom in order to avoid the Company itself.

However due to the White Fang presence within the nation and the large amount of members found within the main city, it's likely the SDC is involved in the shadow conflict with the nation's underground forces, as seen during the events of the RWBY Comic, where a meeting was held on their recent attack on the SDC Faunus labor camps and the losses of their members and the militia's continued on going conflict with the company and their next attack on the companies operations across the world.

However despite the extremely bad relationship and reputation the SDC possess with the White Fang and by extension Menagerie, the SDC has notably tried to better their relationship with the nation and by extension the Faunus race by hiring a few natives to work as guards in their high priority facilities in order to prove that they "don't believe they're all scum", eventually leading to mixed result between both sides.

Miners in Mantle
Add a photo to this gallery

An example of the SDC logo being visible on crates in the "Black" Trailer.

SDC Advertisement on the back of a weapons magazine during "Ruby Rose".

The pamphlet the company gives to people with little knowledge of Dust, from the "The Shining Beacon, Pt.2". 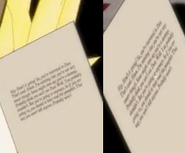 Back of the pamphlet.

Advertisement on the back of an X-Ray and Vav comic book, in "Welcome to Beacon".

SDC Communications Operator on a screen from the Cross Continental Transmit System.

The SDC's worldwide expansion from its home foundation of Atlas
Add a photo to this gallery
Retrieved from "https://rwby.fandom.com/wiki/Schnee_Dust_Company?oldid=1159144"
Community content is available under CC-BY-SA unless otherwise noted.