"Save Nora!" is the seventeenth episode of RWBY Chibi. It premiered on the Rooster Teeth website on August 27th, 2016 for sponsors and August 28th, 2016 for registered users. It was reuploaded on Youtube on August 29th, 2020, together with episode 18, Evil Plans.

"Save Nora!" consists of three shorts:

Jaune Arc waits desperately outside the bathroom door, squirming and groaning with discomfort.

Jaune: Oh, come on, I really have to go!

Ren: (from behind the closed bathroom door) Almost finished. Practice some patience.

Jaune: I don't need to practice patience, Ren, I need to... I need to use the restroom!

Pyrrha Nikos walks up to Jaune.

Pyrrha: Hey Jaune! What are you doing?

Jaune: Oh, hey, Pyrrha! Just, um, doing some new... fighting techniques, that, uh... I invented! (pauses for a moment, then turns to Ren) You're killing me, Ren, I hope you know that. (Ren exits the bathroom) Thank you!

Nora Valkyrie strolls up to the bathroom door.

Nora: Do you mind if I use your bathroom? Ours is broken. I really, really, really, need to go, like for realsies. (before Jaune gives an answer) Thanks Jaune, you're the best! (quickly enters the restroom and shuts the door in Jaune's face as he whimpers)

Pyrrha: That was very nice of you.

Pyrrha: Is this another one of your fighting moves?

Nora exits the restroom, but Sun Wukong immediately appears and goes for the door before Jaune can react.

Jaune: NO! (whimpering to himself) Ohh, you can do this, ohh, just a little bit longer, ohh, mommy's special boy! (continues wriggling in pain)

Sun: (abruptly slams the door open, flattening Jaune against the wall) Just had to wash my hands! All yours buddy. (walks off)

Pyrrha: Are you okay? Do you still need to use the restroom?

Jaune: (hugging the wall) No. No, I'm good. (starts sidling up against the wall and moving away from Pyrrha, making damp noises as he moves)

Pyrrha: Would you teach me some of those fighting moves? I've never seen anything like it.

Jaune gingerly sidesteps away. Pyrrha throws her arms up in frustration.

Outside, in the Beacon courtyard, a snarling Beowolf looms threateningly over Nora.

Nora: Ren, help! I'm being attacked by a vicious monster!

Sun enters the fray with a flying kick, knocking the Beowolf out in a single hit.

Nora: Oh. Okay. Could you move along then? That would be great.

Later, Nora lies apparently incapacitated on the ground while the Beowolf stands over her, wagging its tail idly.

Nora: (dramatically) Oh, won't some brave hero please save me from this deadly Grimm!

Yang Xiao Long comes flying in and knocks the Beowolf out with a punch.

Nora: Do you know how hard it was to find a Beowolf around here?!

Yang: Pretty easy, I mean they're like, around every corner...?

Nora: Get out of here! You almost ruined everything!

Yang: (walking away) You are so weird...

Some time later, Nora struggles with the Beowolf, pulling its tail as it futilely attempts to escape from her.

Nora: Oh no, I'm helpless, and in danger! (to the Beowolf) I'm not done with you yet! Bad Grimm, bad Grimm!

Ren walks over and observes the scene for a moment.

Ren: What are you doing?

Ren: It looks like you have him pretty well under control. (laughs) You never cease to amaze me, Nora. (walks away)

Nora: No, wait, come back! What's a girl gotta do to get rescued around here? Wait, did he say I'm "amazing"?! (exultantly) Ren thinks I'm amazing!

Overjoyed, Nora hugs the Beowolf's arm tight, and the sound of bones cracking is heard. The Beowolf helplessly flops to the ground and goes limp.

Nora: Whoops. I broke another one.

A junior detective badge with Sun and Neptune's mustached faces on it zooms in, then out, in the middle of the screen.

Outside Beacon Academy, Neptune sits forlornly on the sidewalk while Sun paces back and forth in contemplation.

Sun: We haven't caught any perps in a while!

Sun: (perking up, having an idea) You thinkin' what I'm thinkin'?!

In unison, the pair jump up and enthusiastically turn to face each other.

Neptune: On the count of three.

Neptune and Sun: One, two, three!

Over upbeat 80s-style music, Sun and Neptune are seen exiting a Police Surplus store, Sun casually twirling a pair of gold handcuffs around his finger and Neptune spinning a gold baton in his hand. From inside the store, the Shopkeep waves cheerily at the departing customers with a handful of money.

Sun and Neptune then exit an Army Surplus store, clad in flak jackets and carrying riot shields, wearing multiple army helmets on each of their heads. The Shopkeep jubilantly waves at them, both hands full of banknotes.

Sun and Neptune then leave a motorcycle store named Easy Riders, wheeling out two newly-bought motorcycles, while the Shopkeep swims in a huge pile of money behind them.

Next to their bikes, Sun and Neptune stand outfitted with all of their newly-purchased equipment, ridiculously bogged down and struggling under the collective weight.

Suddenly, Mercury Black and Emerald Sustrai run up and immediately make off with both of Sun and Neptune's motorbikes.

Neptune: Get back here!

Both of them struggle to give chase, but Sun manages to make no more than a couple steps and Neptune falls flat on his face.

Jaune REALLY has to go.

A depiction of pain

"I'm being attacked by a vicious monster!"

Yet another broken Grimm

The proud owners of some new wheels 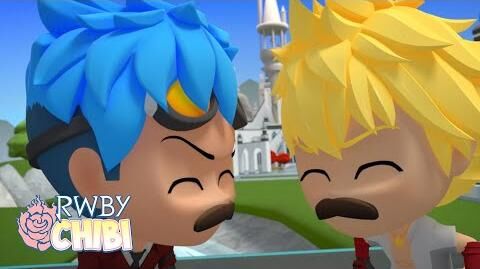 Retrieved from "https://rwby.fandom.com/wiki/Save_Nora!?oldid=1117039"
Community content is available under CC-BY-SA unless otherwise noted.