Start a Wiki
—Ruby sassing Cinder about her outfit.

Cinder fled when Ruby was distracted

"Ruby vs. Cinder" is an encounter where Ruby Rose finds Cinder Fall infiltrating the Cross Continental Transmit System Tower. The two exchange blows briefly, but the fight is interrupted by General Ironwood's arrival. When Ruby recovers from the distraction, Cinder has already fled from the scene.

Having just defeated the CCT's security personnel, Cinder makes her way inside and begins working on the terminals. Meanwhile, Ruby arrives outside and discovers the guards have been knocked unconscious. She then uses her Scroll to summon her locker, which opens to reveal Crescent Rose inside.

After finishing her work, Cinder is informed by Emerald Sustrai that Ironwood is on his way to the Tower. She prepares to make her escape but is interrupted by Ruby's arrival in the terminal room. Ruby scans the room, stumbling briefly because of her high heels. Cinder hides briefly but then decides to reveal herself. Ruby comments that the dance is not a masquerade. Cinder responds by summoning glass crystals from a cloud of dust to fire at Ruby, initiating the fight.

Cinder uses Dust to form glass crystals and blasts them at Ruby with Aura. Ruby twirls Crescent Rose to block the shards and retaliates by firing rounds at Cinder. Cinder blocks these rounds just as easily as she did during their first encounter. Cinder then summons her weapons, Midnight.

Ruby whips Crescent Rose around and fires off a round-going upward and somersaulting down for an attack. Cinder dodges and forms a bow. She fires three arrows that explode on impact with the floor, Ruby gets pushed back and stumbles on her heels, but manages to hold her ground. James Ironwood arrives at their floor in the elevator, and Cinder retreats while Ruby turns to address the new arrival.

Ruby arrives at the battlefield.

Cinder firing arrows.
Add a photo to this gallery

Ruby finds Cinder in the CCT

Cinder and Ruby duel in the CCT 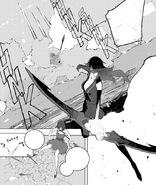 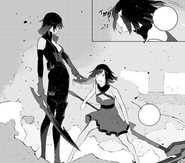 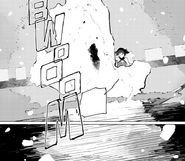 Cinder make her escape.
Add a photo to this gallery
Retrieved from "https://rwby.fandom.com/wiki/Ruby_vs._Cinder?oldid=1098290"
Community content is available under CC-BY-SA unless otherwise noted.