Ruby and Weiss vs. Roman

"Ruby and Weiss vs. Roman" is a battle that occurred in Vale. It was depicted in Chapter 18 of the manga. It was not portrayed or referenced in the main series.

After Ruby prevented Roman from escaping and attacked him the criminal breaks apart. Revealing it was the result of Neopolitan's Semblance. As she and the White Fang Lieutenant arrive to assist Torchwick they prepare to attack Ruby. Only for Blake and Yang stop them and begin fighting them separately. Finally, Weiss comes to assist Ruby's with fight against Roman, who is consumed with rage and states he will fight them.

As the fight continue between them, Ruby attempts to strike Roman with Crescent Rose. But he dodges the scythe and Weiss' ice shards before using Melodic Cudgel's hook to latch on her hood and throw her at Weiss. But they counter his attack by Weiss using her Glyph on Ruby to redirect her back at full speed toward him. The criminal avoids her but more glyphs appear bouncing Ruby upward.

The two lock weapons and Ruby tries convincing him to surrender now that his plan has failed. Pausing he admits the situation does not look good for him. Weiss interprets this as him admitting defeat saying they should restrain the criminal. Suddenly he opens fire separating the pair, then clashes weapons with Ruby again. He voices a conviction to play his role to the end before getting headbutted by Ruby.

Torchwick continues fighting the Huntresses, eventually getting the drop on Weiss. Using his cane to land a blow that sends her flying into a pile of rubble. He then focuses on Ruby, their clash going on until he dodges a swing. Retaliating with a kick that knocks Ruby upward, he notices a glyph under him. Looking around he spots Weiss near Blake and Yang, victorious in their own bouts. The glyph flings him up allowing Ruby to deliver the finishing blow. 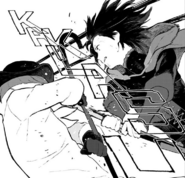 Ruby faces off with Roman

Roman refuses to give up and surrender. 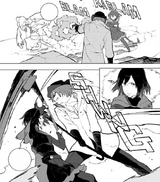 Roman's wrath on Ruby and Weiss.

Roman gets headbutt by Ruby. 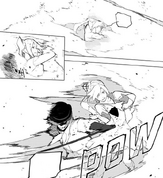 Roman attack Weiss from behind. 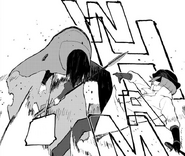 Ruby's final attack on Roman.
Add a photo to this gallery
Retrieved from "https://rwby.fandom.com/wiki/Ruby_and_Weiss_vs._Roman?oldid=1106911"
Community content is available under CC-BY-SA unless otherwise noted.