Start a Wiki
—Weiss to Ruby, indignant at being told to watch out

Ruby and Weiss vs. Beowolves

Both parties were forced to flee

"Ruby and Weiss vs. Beowolves" is a conflict in the Emerald Forest that occurred during "The Emerald Forest", where Weiss Schnee is surrounded by multiple Beowolves, with Ruby Rose later coming in to assist.

After landing in the forest and joining up with Ruby for initiation, Weiss is soon separated from her teammate and is subsequently approached by Beowolves that emerge from the bushes around her.

The scene opens up with Weiss using Myrtenaster to block a strike from a Beowolf's claw, with the force of the blow causing her to slide backwards a good distance. Gathering her thoughts and mentally rehearsing her training, Weiss assumes her combat stance and sets Myrtenaster's revolver to the red Dust slot.

She then dashes forward, aiming to kill a Beowolf that is much larger than the others, directly in front of her. Much to her surprise, Ruby suddenly appears right in front of her and strikes the creature with Crescent Rose before Weiss can reach the Beowolf, and the large Beowolf puts its arms up to block Ruby's strike.

Hastily diverting her strike, Weiss ends up sending a wave of fire in a random direction, setting a tree on fire. Ruby, who is distracted by the sudden burst of flames, is hit by the Beowolf she attacked and knocked into Weiss.

After a quick argument, the girls prepare to face off against the pack of Grimm once more; however, they are suddenly forced to stop due to the fact that the fire from Weiss' diverted strike has spread, causing several burning trees to fall. As the Beowolves retreat from the area, Weiss grabs Ruby and pulls her away as well.

A beowolf strikes Weiss with his claws, forcing her to step back.

Weiss stares down the pack of Beowolves.

Weiss is surprised by Ruby's arrival.

Myrtenaster glows red with the effects of Dust.

Weiss stumbles while trying to divert her own attack.

The beowolf takes advantage of Ruby's temporary distraction to strike her.

The largest beowolf howls for the others to regroup.

Ruby and Weiss see the start of the fire.

The Beowolves flee as the fire spreads.

Weiss and Ruby arrive to a safe spot away from the fire.
Add a photo to this gallery 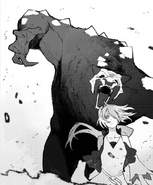 Ruby and Weiss' unexpected team up.

Ruby and Weiss encounters a pack of Ursai.

Ruby and Weiss got into argument after they defeated a pack of Ursai
Add a photo to this gallery
Retrieved from "https://rwby.fandom.com/wiki/Ruby_and_Weiss_vs._Beowolves?oldid=1098271"
Community content is available under CC-BY-SA unless otherwise noted.