Start a Wiki
—Roman, commenting on Penny, before fleeing from the battle

Ruby and Penny vs. Roman and White Fang

"Ruby and Penny vs. Roman and White Fang" is a conflict that occurred at the Vale Port during "Black and White", where Ruby Rose and Penny Polendina fight against Roman Torchwick and members of the White Fang, during an attempted theft of Schnee Dust Company wares.

The fight occurs as a result of Ruby interrupting a fight between Roman, Blake Belladonna, and Sun Wukong where the latter two are attempting to stop Roman from stealing a large shipment of Dust.

Just before Ruby called down to interrupt the fight, Roman had shot down a hanging container, which landed between Sun and Blake, putting Sun right at Roman's feet.

As Ruby interrupts the fight, Penny asks her if the people down below are her friends. Ruby quickly turns around and tells Penny to get back, but in the time it takes her to speak, Roman aims Melodic Cudgel at her and fires a shot at her, blasting her backwards.

Penny then steps forward to defend Ruby, stating that she is combat ready and opens her backpack, releasing Floating Array and jumping down from the building that she is standing on. As she jumps down she sends three of her swords flying ahead of her, which take down two White Fang henchmen. When Penny lands she swings her hands to her right and then left, which sends several of her floating swords flying in the respective directions, sending two more henchmen flying back, either struck or impaled on the blades.

As she retracts the blades back to her, three more henchmen charge at her, so Penny arranges her blades into a spinning circle, knocking two of them back, then jumps in the air and smashes the third guy with the circle. As Penny lands, a large group of White Fang henchmen charge at her, which she quickly defeats by launching all of her blades at them, knocking them all into the air.

Seeing the trouble being caused on the ground, three of Roman's Bullheads fly over and open fire on Penny, who quickly defends herself by turning her swords into a spinning shield, blocking the incoming fire. Her backpack then opens again and sends two swords flying into the wall behind her. The wires between Penny and the swords then retract, sending her flying back towards the wall.

Penny swiftly lands, before making her swords float in front of her in a spinning, cylindrical cannon, as each sword folds and transforms into a somewhat gun-like shape. She promptly charges the assorted blades, with a green glow accompanying the motion, before unleashing the pent up energy in a massive concentrated beam, which slices the Bullheads in half, causing them to fall into the sea behind her and Ruby. Penny then fires several of her swords into the side of one of few remaining Bullheads and tightens the wires, pulling the VTOL down to the ground in a massive explosion with minimal effort.

Roman, seeing the havoc that Penny is causing, decides to flee in the remaining Bullhead with what is left of his group of White Fang henchmen.

Penny brings out her swords 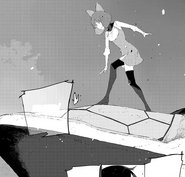 Penny on top of one of White Fang's airships.

Penny prepares to destroy one of of White Fang's airships with her swords. 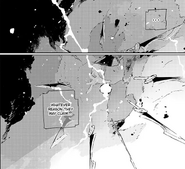 Penny charge her weapons on her targets 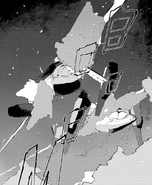 Penny destroy most of the Bullheads.

Penny's reason why she fight.
Add a photo to this gallery
Retrieved from "https://rwby.fandom.com/wiki/Ruby_and_Penny_vs._Roman_and_White_Fang?oldid=1098282"
Community content is available under CC-BY-SA unless otherwise noted.