Ruby Rose alludes to the character Little Red Riding Hood[1] from the fairy tale of the same name, which follows Team RWBY's theme of fairy tale allusions. This allusion has had the following influences on the character and show:

Ruby's emblem is a rose, which Monty Oum described as a "scatter" rose[2]. She shares this emblem with her mother, Summer Rose. This emblem appears on some of Ruby's possessions:

Ruby's main appearance for Volumes 1–3 changed multiple times during development, and three of the previous versions of her original "battle outfit" have been shown to the public.

Volume 2 Production Diary 2 shows a colored version of a piece of concept art by Einlee that had been previously released. In this art, her hair is a dark, dull red, and she is wearing an off-white long-sleeved shirt with thin red ribbons around the wrists. She wears a black waist cincher that has shoulder straps that cross in the back, and the front middle of it is red with black crisscrossing laces. Her cape is attached at the shoulders by cross-shaped clips and appears to have a hood. Around her neck is a black collar-like accessory. She is wearing an ammo belt diagonally across her torso. Hanging from her skirt are a few chains on her left side and two metal crosses in the front toward her right. Her boots lack any laces whatsoever.

The lower half of an early 3D model Monty made is almost identical to the final version. Overall, the black color of her clothing and hair appears to be lighter than the final version, and there doesn't appear to be any red coloring in her hair. She wears a black blouse with a thin horizontal strip of red fabric on the chest, possibly the top edge of a pocket, and the ends of her sleeves flay out. The top portion of her cape encircles her neck, resembling a thick scarf, and it appears to have a hood.

Aspects from both of these designs seem to have been combined to create Ruby's Volume 4–5 outfit.

In the "Red" Trailer, she is wearing the same outfit as her final version with only two differences: 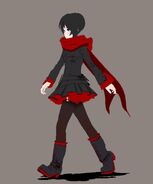 Ruby's appearance in the "Red" Trailer

Ruby's outfit from the flashback in "Burning the Candle" can be seen more clearly in a piece of concept art by Kristina Nguyen.

Ruby is depicted wearing a red, hooded, zip-up, sleeveless jacket that has a pair of wide pockets. There is a short, red cape hanging from the back of her jacket. Under the jacket, she appears to be wearing a white sleeveless shirt. She is wearing a short black skirt and a pair of small black shoes.

This childhood outfit bears similarities to Ruby's original battle outfit, most notably the color scheme of red and black, the red cape, the hood, and the black skirt.

The first design features Ruby wearing a light pink, short-sleeved, hooded sweater with three large, white buttons down the middle and a pair of small, triangle-shaped ears on the hood. For her bottoms, she is wearing a pair of short, black shorts, and she wears a pair of thigh-high light pink and white striped socks with black patches on the heels and the tips of the toes. With this outfit, she is carrying a Beowolf pillow.

The second design more closely resembles the design that made it into Volume 1, with only one difference:

The third design is a pale pink onesie with three large black buttons down the middle, a pair of pockets that each have a black button, and a hood that has a large, white poof ball on top. The onesie has a pattern of light pink clouds, pink scythes, and yellow lightning bolts. On her feet is a pair of dark pink slippers, each of which has a small, white poof ball on top.

It appears that one possibility that was considered, was for Ruby to simply wear an over-sized short-sleeved shirt.

There is no visible difference between the show and concept art versions of the following outfit.

Original storyboard of the Volume 1 Opening

The Maya Ruby model in Volume 4