Ravagers are bat-like Creatures of Grimm that first appear in RWBY: After the Fall, where they are encountered by Team CFVY.

Ravagers have a strong resemblance to bats. Typical to the Grimm, they have bone-like masks with red markings on them, as well as spikes protruding from their backs, and a bone-like ribcage over their pitch black fur. Additionally, they also have large fangs that interlock over their jaws. Ravagers have red wings that are described as leathery in texture and are considered to be uglier than Nevermores.

Young Ravagers are referred to as Baby Ravagers, shown to be tiny in size as opposed to their full sized counterparts, who were described as "fruit bats with swords for claws".[1]

In RWBY: After the Fall, Ravagers were one of the species of Grimm that invaded and ravaged the settlement of Gossan. During their travels in Vacuo, Team CFVY was stalked and harassed by a colony of Ravagers, eventually slaying them all in Feldspar. Other colonies of the Grimm followed the Huntsmen-in-training but did not attack them.

A swarm of Ravagers appears in RWBY: Before the Dawn, attacking Velvet Scarlatina and Octavia Ember in the Shade Academy Initiation. They use their sonic screams to cause an avalanche that shifts an entire section of the Vacuan landscape.[2]

They later attack Shade Academy as The Crown launches their assault, targeting Gillian Asturias and throwing her into the air at one point.[3]

In After the Fall, Ravagers are shown to bite and claw at opponents in large swarms. RWBY: Amity Arena notes that these Grimm are faster flyers than Nevermores or Griffons. They are shown to be able to emit sharp sonic screeches.

Adult Ravagers are able to lift humans into the air with ease. 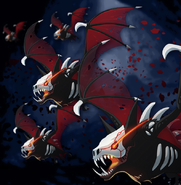 Retrieved from "https://rwby.fandom.com/wiki/Ravager?oldid=1151271"
Community content is available under CC-BY-SA unless otherwise noted.