RWBY in Other Media

RWBY and its characters have made a range of crossovers and appearances into a large range of other shows, games and other media. References and Easter eggs have appeared in properties owned by Rooster Teeth, as well as in those owned by other companies.

On December 1st, 2013, RWBY characters appeared in "The Animated Recap", an episode of RT Recap, a now-discontinued show that reviews the preceding week's Rooster Teeth and Achievement Hunter videos.

Ruby Rose, Weiss Schnee, Blake Belladonna and Yang Xiao Long appeared alongside other animated characters from Rooster Teeth, such as Sarge from Red vs. Blue and the Let's Play Minecraft personas of Geoff Ramsey and Gavin Free. They also interacted with fictionalized versions of Burnie Burns, Joel Heyman and Gus Sorola from Rooster Teeth Animated Adventures.

At the inaugural RTX Australia in Sydney on January 24th, 2016, the second RWBY panel hosted a Q&A session with Lindsay Jones and Barbara Dunkelman in-character as Ruby and Yang. The pair answered questions and interacted live with fans as their characters under the premise of a video chat conversation from Beacon Academy.

The faces of Lindsay and Barbara were captured using a GoPro, with a Kinect to capture their motion performance. The characters were then rendered in real-time in Unreal Engine 4. The technical side was set up with the help of Opaque Media using Faceware Tech software.[1][2]

RWBY characters have made cameos in some episodes of Rooster Teeth Animated Adventures. Yang Xiao Long made a cameo in "Racial Super Texas" sitting at a bar. A doll of Yang Xiao Long also appeared in "Spooky Scary Ghost Stories", in which her arm was broken by a ghost.

RWBY and JNPR are two of the names scrolling behind Hargrove on The Staff Of Charon.

Cinder Fall and Yang appear in the trailer for Red vs Blue: Zero shown at the Rooster Teeth Comic-Con@Home 2020 Panel as commenters for the characters' live stream, under the handles Cinder_2u and Yang4Real, respectively.

Ruby and Sun figures on the shelf

Relic of knowledge in the background

When the main characters enter the virtual reality world, the Ether, their avatars briefly wear the outfits of several RWBY characters.

On October 21st, 2015, three days before the premiere of RWBY Volume 3, Yang appeared in an episode of ScrewAttack's Death Battle web series, which pits fictional characters from different franchises against each other in a hypothetical battle to the death. Yang fought and won against Tifa Lockhart from the video game Final Fantasy VII. The episode featured new dialogue from Yang's voice actor Barbara Dunkelman as well as original animation by ScrewAttack's animator Torrian Crawford.

ScrewAttack had included a tribute to series creator Monty Oum in a previous episode of Death Battle, with whom the inclusion of a RWBY character on the show was also discussed before his passing. On November 4th, 2015, ScrewAttack announced that they were joining Rooster Teeth, which is also a partner of the Fullscreen network.

Another Death Battle, Weiss vs Mitsuru would air on June 12th, 2019 after ScrewAttack has been rebranded to Death Battle.

Weiss was defeated by Mitsuru.

In another episode of Death Battle Exhibition, Blake fought Inuyasha from the anime, InuYasha.

Blake was defeated by Inuyasha.

In another episode of Death Battle Exhibition, Yang fought Katsuki Bakugo from the anime, My Hero Academia.

Yang was defeated by Bakugo.

The Haven Academy Vault from RWBY is featured in the Death Battle episode Ryu VS Jin (Street Fighter VS Tekken) as the locale for the second half of the fight. In addition, the choreography for this portion is similar to that from the RWBY Volume 5 episode "Downfall".

Team RWBY were contestants against the Teenager Mutant Ninja Turtles for a Community Death Battle poll for the February 12th, 2020 Death Battle Cast show. The poll opened on February 7th, 2020 and ran until the show aired on the 12th.

Yang makes a cameo appearance with her combatant Tifa. Yang is portrayed losing to Tifa as a hypothetical alternate outcome to her battle.

In another poll for Death Battle Cast, Cinder Fall opposed Azula from the series "Avatar: The Last Airbnder". Voting began on August 28th, 2020 and ran until when the show aired on September 2nd, 2020.[4]

Dragonzord VS Mechagodzilla is the 114th episode of DEATH BATTLE! and Akane Yashiro, the pilot for Mechagodzilla has the same helmet design as the Atlas pilot.

In a Death Battle cast #221, Mercury Black opposed Chun-Li from the Street Fighter franchise and was aired on March 26, 2021.

Blake fought and won against Mikasa Ackerman from Attack on Titan.

2B vs Winter Schnee

During the Community Death Battle for the Death Battle Cast on June 2nd, 2021, Winter Schnee was featured in the poll against 2B from NieR:Automata. Polling began on June 1st, 2021.

Yang also appears, but unlike her sister, she won.

In episode 2, Miles Luna asks himself 'What would Ruby Rose do?', and in the next episode, decides to put on the Ruby suit (worn by Lindsay Jones in RTX 2014) as "This Will Be the Day" plays, and tries models of various RWBY weapons. Miles continues in said costume for the rest of the show.

Barbara Dunkelman created a live-action parody version of the Volume 7 Opening. It aired on YouTube on November 8th. 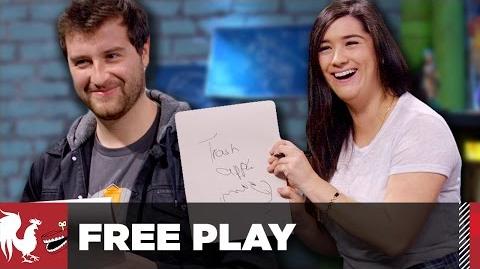 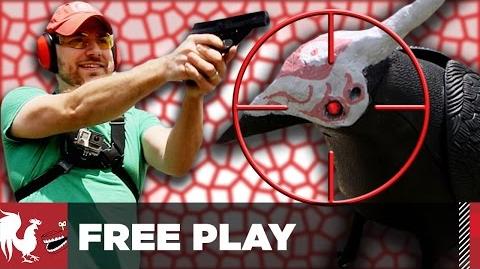 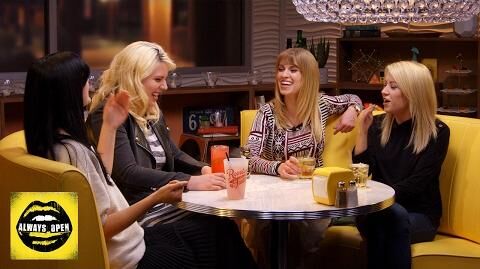 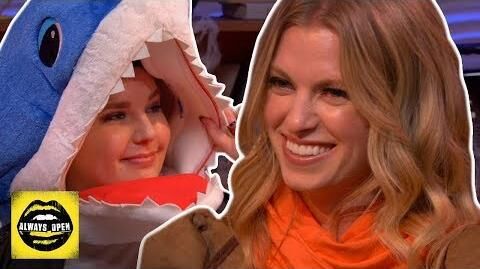 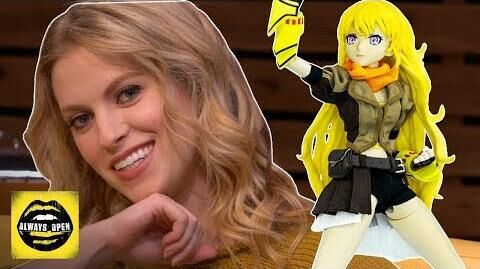 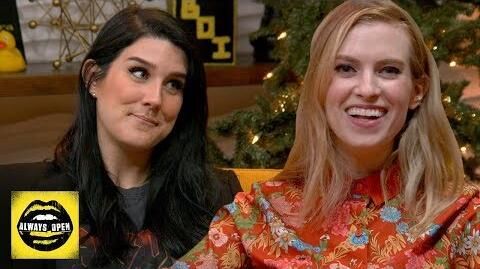 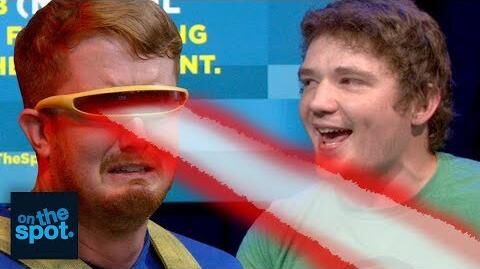 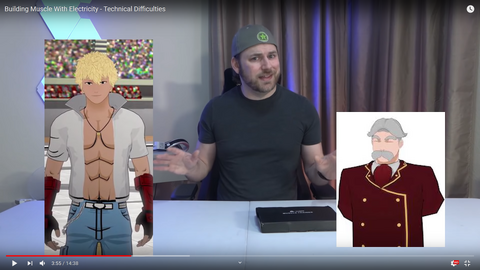 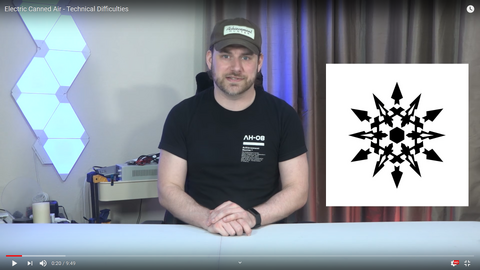 Making a Creature From Raised by Wolves 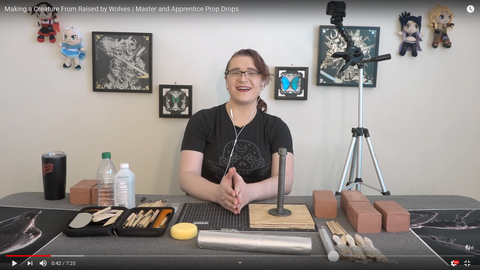 On May 9th, 2017, a limited event collaboration between RWBY and Crusaders Quest was announced. The available playable characters to be obtained are Ruby, Weiss, Blake, Yang, Nora Valkyrie and Pyrrha Nikos. In the event, Roman Torchwick and Neopolitan appear as event bosses while the Grimm as regular enemies. The limited event of Crusaders Quest lasted from May 11th, 2017 until May 25th, 2017.[6]

During Evolution Championship Series, it was announced that Ruby is going to be in a crossover fighting game created by Arc Systems Works and will include characters from BlazBlue, Persona 4 Arena and Under Night In Birth. The game is set to be released in 2018.[7] A demo of Ruby in the game was tweeted by Gray Haddock on October 3rd, 2017. On October 6th, 2017, Arc Systems Works released an early demo gameplay trailer of the crossover fighting game featuring the seven confirmed playable characters.[8]

On October 15th, 2017, Weiss was confirmed to be in the fighting game on the second character introduction trailer of BlazBlue: Cross Tag Battle. The game will be available on PlayStation 4, Nintendo Switch and Steam platforms.[9]

On January 13th, 2018, Blake was confirmed to be in the fighting game as one of 20 confirmed DLC characters on the Arc System Works Fighting Game Award 2017 show for BlazBlue: Cross Tag Battle.[10]

On February 7th, 2018, Blake along with Yang were confirmed to be free DLC characters on the EVO 2018 Special Promotion Trailer for BlazBlue: Cross Tag Battle.[11]

On February 21st, 2018, it was announced that the game was featured an original story of all four franchise's perspectives of RWBY, BlazBlue, Persona 4 Arena, and Under Night In Birth called "Episode Mode".[12]

On January 25th, 2019, it was announced that the game will have an arcade version along with a new character that is only available in Japan. The arcade version was be released in Spring 2019.[14]

On August 4th, 2019, Neopolitan has been confirmed to be one of the season 2 DLC characters on BlazBlue Cross Tag Battle 2.0 Announcement Video trailer. The "Ver. 2.0 Expansion Pack" was release on November 21st, 2019.[15]

On May 31st, 2018, Ruby makes a brief cameo in a segment where Sugita, Ragna's Japanese voice actor, imagines Ragna letting Ruby use his weapon while he wields Ruby's weapon, Crescent Rose.[16]

On July 19th, 2019, a limited event collaboration between RWBY and SMITE was announced. Team RWBY is confirmed to appear as voiced skins.[24]

Announced at Anime Expo 2021, RWBY will be added to the Weiss Schwarz Trading Card Game starting in December 2021. [30] 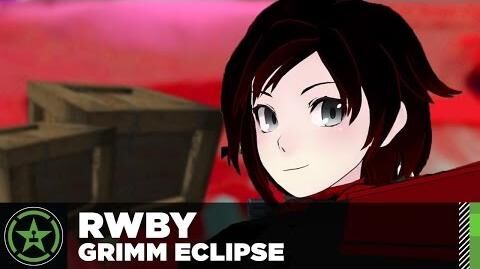 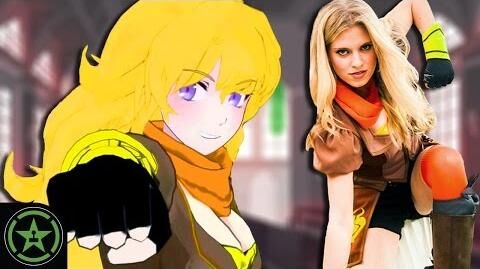 The 2019 horror film Doctor Sleep, based on the novel of the same name by Stephen King, features two RWBY posters; the RWBY Volume 5 poster and RWBY Volume 4 Retro Reveal poster.

Doctor Sleep prominently features Emerald Sustrai through merchandising and allusions. In Doctor Sleep, Ewan McGregor plays Danny Torrance, a character introduced as a child in The Shining (Doctor Sleep is the sequel to The Shining). Danny meets Abra (played by Kyliegh Curran), a girl with a power referred to as "the Shining", who is targeted by Rose the Hat (played by Rebecca Ferguson), a powerful, quasi-immortal being who feeds off psychic children. Abra, who is otherwise a regular teenaged girl, has a room adorned with posters and action figures featuring characters from RWBY, with a specific focus on Emerald.

Two more posters on the side wall, as well as a Yang plush on her shelf.

Figurine of Emerald on the nightstand