Qrow Branwen alludes to the Scarecrow from The Wizard of Oz.[1]

Secondary Allusion/Role for Another Character's Basis

Some characters stand in as a certain role for another character's allusion, giving them a secondary allusion alongside their primary basis. Qrow is the Muninn,[2] to Raven's Huginn. Muninn is a raven who flies around the world gathering information for Odin. Specifically, he alludes to the poem Grímnismál. This has had the following influences on the character and show:

Qrow's emblem is a winged eye with a gear in its iris. This emblem appears on one of his possessions:

There is no visible difference between the currently available concept art and final version of Qrow's appearance. 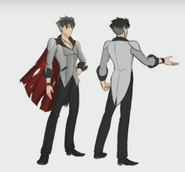 The Maya Qrow model in Volume 4