Pyrrha Nikos alludes to Achilles, which follows JNPR's theme of people who dressed themselves as the opposite gender.[1] Achilles once had to go into hiding by disguising himself as a red-haired woman named Pyrrha. This allusion has had the following influences on the character and the show:

Pyrrha's emblem is a spear laid across a shield. This emblem appears on two of her possessions:

The earliest piece of concept art that has been released is an old sketch that Monty Oum made and shared a photo of. This design is similar to Pyrrha's final appearance with the following differences:

In an early piece of concept art by Einlee, Pyrrha is shown wearing the same outfit as she does in her final design, minus the headdress. Her hair is down instead of being in a pony tail, and her eyes are yellow instead of green.

In Vol. 5: Shine, Ein Lee comments on her various contributions to the series. There, she mentions when working with Monty Oum and the design process for Pyrrha. Ein Lee comments that Pyrrha was designed with Greco-Roman influences in mind, combining the ideas of a "sexy pinup girl and badass warrior." Her design is simultaneously high-drama – featuring golds, reds, and opera – whilst also staying true to her paragon personality.

Another piece of concept art by Einlee shows her final design and includes a concept for her headdress. 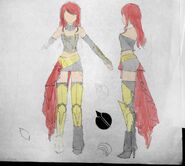 Concept art from "Fall" by Einlee