Pumpkin Pete's is a brand of cereal in the world of RWBY.

The only known flavor is Marshmallow Flakes.

Only characters from cartoons and star athletes are awarded the "honor" of getting their face on the packaging. Pyrrha Nikos had her face on every Marshmallow Flakes box.

The cereal is referenced by Weiss Schnee briefly. During a conversation in which Jaune Arc suggests that Weiss and Pyrrha join "the winning team" (being his), Weiss becomes annoyed at Jaune's clear lack of recognition. She lists several impressive feats performed by Pyrrha, but it's not until she mentions her appearance on Pumpkin Pete's cereal boxes that Jaune realizes Pyrrha's status.

The cereal's mascot is a bunny, which can be seen on the front of Jaune's hoodie and pajamas. The character is usually covered by his armor, however. Jaune tells Ruby Rose, Nora Valkyrie and Lie Ren that he collected fifty box tops to get the hoodie as a prize.

Jaune's hoodie exposed, revealing Pumpkin Pete in "The Next Step".

Pumpkin Pete's cereal seen in "The One with a Laugh Track". 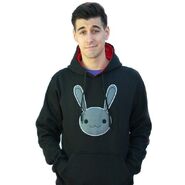 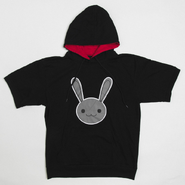 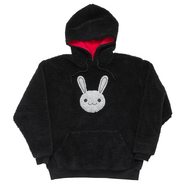 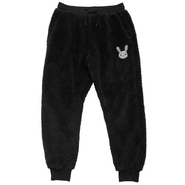