A prosthesis is a device that replaces a missing body part. Prosthetics in the world of Remnant are advanced enough to allow the wearer full control and move identically to the body parts that they replace, frequently with added abilities.

Prosthetics can even take the place of half of a person's body, as seen with James Ironwood, who had both his arms, right leg and the right half of his torso completely replaced by a mechanical prosthesis. This extreme case, however, required Ironwood to wear a device on his forehead that wirelessly connected with the prosthesis in order to control it.[1]

Weapons, such as guns, can be integrated into prosthetics. Mercury Black and Yang Xiao Long, for example, have guns within their prosthetics. While Mercury's guns simply have a barrel always present in each heel[2], Yang's gun tucks away into her forearm. Both of these dramatically increase attack power.

Mercury's prosthetic legs appear to also utilize cyan-colored Dust in some way, as seen when one powers on and begins glowing in "Beginning of the End".

In RWBY: The Session, Dr. Rockshow has a cybernetic left eye. He also has a large cannon connected to his arm, but it is unknown whether the cannon is a prosthetic or if he simply wears it.

Doctor Merlot has both a prosthetic right arm and left eye. The full capabilities of Merlot's prosthetics are unknown.

Maria's prosthetic eyes help her see clearly, but they only see in a light blue tint which causes her to be colorblind.

Tock had sharp metal teeth implanted into her jaws, which she could use in battle, such as when she broke one of Maria's kamas in "The Grimm Reaper". She willingly volunteered to replace her original teeth with the jaws, in order to bring out her Faunus heritage more.[3]

First seen in "Lost", Tyrian Callows gains a prosthetic tail after Ruby Rose cut off his stinger. Similar to the original, this robotic tail is capable of releasing venom, through a protractible curved needle.

Pietro Polendina is a world renowned Atlesian scientist and had a clinic in Mantle where he helped the people there before the Kingdom was destroyed. He created Yang's arm and Maria is one of his many patients and visits him every ten years.

Mechanical prosthetic body parts are able to channel and be protected by the user's Aura, much like standard weapons.

Generally speaking, prosthesis in Remnant is not stigmatized by mankind, though characters may choose to hide them for their own reasons.[4]

An Accessibility Dialogue Assistant, or simply, "Ada", is a device intended to aid people with disabilities, specifically, blindness. The device takes the form an almost invisible piece that is used as an earbud. It is designed to send sonar pulses to scan the nearby environment, to give users 'artificial sight.' An Ada device is activated through voice control, which takes the form of a female voice. Additionally, the system is set to adapt to the user of the device and features a compass.

An Ada also features a battle mode called the Cyrano Protocol, which scans the area for nearby weapons, and assesses both the weapons and the user's fighting style. Fox Alistair uses an Ada device in RWBY: After the Fall.

Later, the Atlas Military used Ada technology for target acquisition and threat detection, using the program to create the Atlesian Arachna Mines, bombs that could scuttle towards enemies on the ground.

It is shown to be able to scan at least one kilometer ahead of the user [5] and can be used as a research device, which Fox uses to discover Xanthe Rumpole's first name.[6]

The following characters have been revealed to possess or have come to possess prosthetics:

Dr. Rockshow with his cybernetic eye and arm. 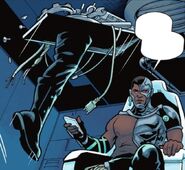 Victor's Left side of his head, neck, chest, left arm, and his right leg.