RWBY Wiki
Register
Don't have an account?
Sign In
Advertisement
in: Male Cast and Crew, Voice Actor, Artist,
and 2 more

Patrick Rodriguez was the Art Director for Volume 3-7 of RWBY, as well as a concept artist. He also did voice work for minor characters, such as the Shopkeep, Cyril Ian, the Atlas Soldier from "A Minor Hiccup" and the third White Fang Goon in "Mountain Glenn".

He created the design of the Beowolves that made their debut in "The First Step, Pt.2" and was also responsible for some of the 2D animation in the show, such as chibi Ruby Rose. He was the first person to voice two or more characters in the show.

Aside from his work on RWBY, Patrick also hosted Quick Draw, a series where he interviews various staff members at Rooster Teeth Productions whilst illustrating their exploits.

He was let go by Rooster Teeth on December 16th, 2019. However, he still remains on good terms with many of his former coworkers in the company.

The camera pans down to Ruby walking through a forest.

The camera switches to being in front of Ruby, who continues walking.

The camera pans right, so the tree moves left across the screen.

The camera zooms past Weiss to a mysterious figure watching her train.

Blake standing in a tree, before the camera pans behind another tree.

Close-up on Yang's face, just before she winks at the camera.

A cloud is produced as Yang speeds away.

A Beowolf slashes its way through the cloud.

The Beowolf charges toward the camera, just before the screen goes dark.

Smoke swirls into a central point.

A lit cigar illuminates the screen to reveal Roman.

Nora excitedly leaps onto Jaune's back.

A brief shot of Glynda and Ozpin, before a shine on his glasses turns the screen white.

Ruby walks alone with the full moon behind her.

Ruby stops and looks up, her eyes finally visible.

Weiss, Yang, and Blake stand in front of Ruby.

Yang reaches her hand out to Ruby. 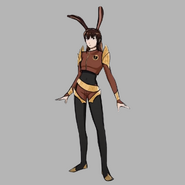 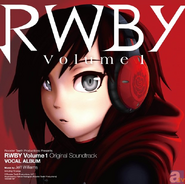 Artwork for the Japan release of the Volume 1 soundtrack

Official cover art for RWBY: After the Fall