Start a Wiki
—Jinn, on Ozma

Cape (as Ozma and King of Vale)

Ozma, now known as Ozpin, was an ancient warrior introduced in "The Lost Fable". He rescued Salem from her imprisonment in a tower, and both eventually fell in love with each other. However, when Ozma fell ill and died, Salem set out to convince the Gods to resurrect her lover. Ozma was revived by the God of Darkness, but killed again by the God of Light soon after. Ozma was eventually given a choice by the God of Light before he abandoned Remnant; he would be able to return to the land of the living to act as a guide for Humanity and would protect the Relics, powerful items that once brought together would bring the Gods back to Remnant.

The God of Light gave him the ability to reincarnate after death, joining souls with another like-minded person so that he would never be alone. After returning to the world, Ozma reunited with Salem. The two acted as gods and created a prosperous Kingdom while also starting a family, but they turned on each other after Ozma displayed his disagreement with Salem's plans for Humanity. Their children were killed in the ensuing battle and Salem murdered Ozma, who reincarnated again. Thus began the centuries-long feud between the two, with Ozma making it his mission to protect the world from her evil.

At the start of RWBY, Ozma's current incarnation was Professor Ozpin, the Headmaster of Beacon Academy. Following Ozpin's death at the hands of Cinder Fall during the Battle of Beacon, Ozma's soul joined with Oscar Pine.

During his first life Ozma had tanned skin with messy brown hair and brown eyes. He originally wore a blue-green tunic with a tan undershirt, a blue cape and black trousers with brown boots. Both his tunic and cape are outlined with golden markings. Over this, he wears metal armor held by brown belts and straps. The armor is etched with ornamental patterns.

The first reincarnation of Ozma was still tanned but had platinum blond hair. He at first wore a white tank top, leather gloves and boots, and brown pants, along with a blue sash tied around his waist and a pendant with a green jewel. By the time Ozma decided to alongside Salem become a god-like figure to mankind, he wore a more regal attire, featuring a dark gray coat with black shoulder pads along with details in light blue and dark blue cuffs. Under his coat he wore a dark blue dress shirt with light blue linings and details, and donned white gloves upon his hands. He also wore gray pants, and black shoes.

One of a number of unnamed incarnations seen only in "The Lost Fable". An old man with long dim grey hair, wearing nothing but tattered shorts, seemingly using The Long Memory as a crutch to walk, whether from exhaustion or physical disability.

One of a number of unnamed incarnations seen only in "The Lost Fable". A younger man seen downing a bottle of an unknown (implied to be alcoholic) beverage, wearing a modern-looking green coat, brown trousers and black-grey shoes.

One of a number of unnamed incarnations seen only in "The Lost Fable". Shown to have "made peace" with Ozma's spirit and even formed a family. The first incarnation shown to have used the current form of The long Memory, hiding it away in a safe for the next incarnation.

One of a number of unnamed incarnations seen only in "The Lost Fable". Shown to have reacquired the Relic of Knowledge and asked three questions to Jinn, being distraught at his last question, "How do I destroy Salem?", receiving the answer, "You can't.". 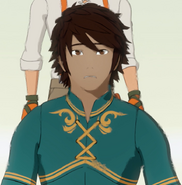 Oscar Pine
Add a photo to this gallery

Ozma was described to be a pure and noble soul, a righteous warrior who did things for the greater good. He was always ready to lay down his life in pursuit of this ideal. He saved Salem not because he desired her hand in marriage like the others, but because he simply believed that she deserved her freedom.

Ozma also became infatuated with Salem, so much that he only agreed to return to Remnant for her. However, his love for her led to him agreeing with her plans to insert themselves as the world's new gods. He was shown to be happy with her when they started a family, but after a while he remembered his task and turned against Salem, trying to sneak their children away from her.

Throughout his many deaths and lives, Ozma became depressed, suicidal and an utterly broken shell of his former self, wanting to forget his past altogether and hide away from the world. However he still possesses his sense of duty and justice, and eventually decided not to give up. His personality eventually transformed into the man now known as Ozpin.

In his original life, Ozma was a renowned warrior considered to be of legendary prowess. He was able to best large creatures and challenges where many other warriors could not. Over time with his incarnations, Ozma's combat skills became sharper. His initial weapon was a long scepter capable of being used as a melee weapon in addition to being a conduit for his magic. Ozma's more recent incarnations use The Long Memory.

As one of the original Humans during the time of the Gods, Ozma is capable of performing powerful feats of magic, such as large energy blasts channeled through his scepter. At the time of Humanity's second emergence, his powers were so great that people worshipped him alongside Salem as gods. Over the course of his many incarnations, he gave away parts of his magic, such as the case with the Maidens as well as the Branwen twins. In the present, his magic is a fraction of what it once was.