The following is a list of Mistral and Anima minor characters from RWBY, arranged alphabetically and categorically.

Oscar's Aunt is a woman who lives on a farm somewhere in Mistral with her nephew Oscar Pine and is his only known relative. She has not made a physical appearance yet, but is heard in "Family" and "Punished" calling out to Oscar.

She is voiced by Marissa Lenti.[1]

An unnamed Haven Tourist is interviewed by a news reporter in "Beginning of the End" about his reaction after watching Yang punch Mercury's leg at the Vytal Festival Tournament. He remarks that the scene was disgraceful and "completely uncalled for".

He is voiced by Robert Reynolds.[2]

Heather Shields was a Huntress from the Kingdom of Mistral. As Qrow attempted to enlist the help of other Huntsmen and Huntresses, he eventually visited Heather's home. The visit quickly ended on a sad note when it became apparent that Heather was missing in action and her family had no knowledge of where she was. It was later revealed that Heather was among the numerous Huntsmen and Huntresses killed by Tyrian Callows and Hazel, for Lionheart had given their locations to Salem.

The name "Heather" is derived from a flower that is found in colors ranging from white to various shades of pinks and purples. "Heather shield" is a type of medieval shield.

An unnamed man and his daughter (credited as Small Girl) are visited by Qrow when he asks them about Heather Shields. Annoyed at the man's lack of response, Qrow quickly becomes assertive but is interrupted when Heather's daughter appears. She asks her father if Qrow knows where her mother is. Realizing that Heather is missing in action, he apologizes to the two for bothering them and leaves.

The Small Girl is voiced by Emily Fajardo.

The Mistral Pilot was voiced by Stan Lewis.

The captain of the Mistral police force arrived at the Battle of Haven in response to the White Fang's attempt to blow it up. The police force came with Mistral airships. The Captain is seen with Kali Belladonna, who most likely went to notify the authorities while the rest of the Menagerie Faunus went directly to Haven Academy.

She was voiced by Jamie Smith

A lone woman walked along a mountain path before encountering a badly wounded Cinder Fall. At first, she was concerned for Cinder, until she noticed Cinder's Grimm arm and gasped. Cinder's Maiden eyes flared up, and the woman was never seen again. By the time Cinder went to town, she wore the woman's clothes and held a bag full of Lien, implying she killed the woman to take her wardrobe and possessions.

The Mistral Woman was voiced by Lauren Aptekar.

The Ramen Shop Owner is a disgruntled worker who Qrow meets while trying to look for Huntsmen to help him out. He appears to have a sour history with a Huntsman named Shiro Wan, as Shiro asked the owner if he could borrow 16,000 Lien from him and has not paid him back yet. The owner has a hobby of wood carving whenever he is not too busy. He also appears to be racist towards Faunus, having a "No Faunus" sign outside of his shop. He threatens Qrow with a knife upon learning he is looking for Shiro, but is surprised when Qrow returns and pays Shiro's debt. He is last seen muttering, "That idiot", upon realizing something must have happened to Shiro.

The Ramen Shop Owner is voiced by Nick Landis.

The mysterious Red-Haired Woman bears some resemblance to Pyrrha Nikos. She first appears in "Lost", when she approaches a memorial statue of Pyrrha while Jaune stands in front of it. The two have a heartfelt conversation about Pyrrha before the woman mysteriously vanishes, leaving her bouquet of red lilies near the statue. It is strongly hinted that this woman is Pyrrha's mother.[3]

The Red Haired Woman is voiced by Jen Brown, who also voices Pyrrha.

Shiro Wan was a Hunstman from the Kingdom of Mistral. He is an old friend of Qrow's. At some point, he came to owe the Ramen Shop Owner 16,000 Lien, but he did not pay him back. When Qrow goes to enlist Shiro's help, he is nowhere to be found; Shiro has been registered on a search and destroy mission for five weeks. It's later revealed that Shiro was among the numerous Huntsmen and Huntresses killed by Tyrian and Hazel, as Lionheart had given their locations to Salem.

"Shiro" is a Japanese word meaning "white" or "castle".

A large amount of huntsmen were killed off by Hazel Rainart and Tyrian when Leonardo Lionheart leaked their identities to Salem. Qrow tried gaining allies in his fight against Salem, only to find out that his acquaintances were killed.

F. Pickeral was a Mistralian Huntsman who was responsible for the incarceration of Tyrian Callows after his serial killings across Anima. Following this, Tyrian was set to be transported to Atlas on an airship. Pickerel insisted that the ship needed more security, but he was ignored and was then removed from the case due to his lack of cooperation. After Tyrian was freed from imprisonment, Pickerel was later found dead in his home.

Pickerel might be named after the Pickerel frog and likely represents the Frog from the fable The Scorpion and the Frog with Tyrian representing the Scorpion.[citation needed]

Madam Xahn[4] is a healer from Mistral. She is also the one who helps Ruby recovers her depression by going through the Garden maze. She and the maze have only appeared in RWBY the comic.

Brunswick Farms had people before they were killed by the Apathy. They were first see in "The Coming Storm".

Bartleby was the head of one of Brunswuick's households, he and his family were amongst the founders and leaders of the settlement. Maria Calavera inferred he was highly ambitious, always coming up with new schemes to aid the Farms. He wore a straw hat, and a blue vest over a white shirt. Bartleby had short brown hair and a beard. His wife had pale skin and brown hair, and wore an orange waist coat, covering her head with a coif.

At one point, Bartleby and Brunswick's Huntsman encountered the Apathy in the woods, with the Brunswick Farms running low on income to pay Huntsmen protection fees, Bartleby took to using the Apathy to his advantage, drawing two of them from the woods into the cellar. Bartleby lied to his wife, using the excuse he was sealing the waterway in order to clear his head and tell her tomorrow. However, before he could do so the rest of the pack arrived in the settlement, ultimately killing everyone. Weiss Schnee finds the corpses of Bartleby and his wife in their bedroom, having died in their sleep.

The names of the three respective families in Brunswick Farms were the Brunswicks, the Putnams, and the Melvilles.[5]

Amongst the settlers, a Huntsman and a Farmhand worked as a security for a high income. The Huntsman was a tanned man with a goatee who covered his hair with a cowboy's hat, wearing a beige duster coat with ammunition straps across his stomach. His weapon was a Dust rifle. The Huntsman's skeleton is briefly seen in the waterways as Team RWBY escapes the Apathy. 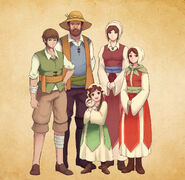 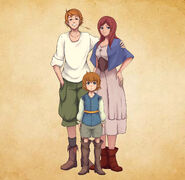 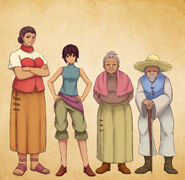 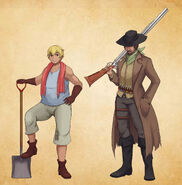 The Farmhand and Huntsman
Add a photo to this gallery

In the "Volume 6 Adam Character Short", the White Fang were ambushed by several Human Supremacists while traveling. During the small skirmish, Adam Taurus incapacitated several of the supremacists to defend Sienna Khan and Ghira Belladonna. After he killed one with his Semblance the others run away, calling them freaks as a parting insult.

Retrieved from "https://rwby.fandom.com/wiki/Minor_Characters/Mistral_and_Anima?oldid=1105521"
Community content is available under CC-BY-SA unless otherwise noted.