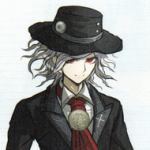 Content Moderator Discussion Mod
9,460 Edits since joining this wiki
May 28, 2014

Greetings and welcome to this small corner of my soul, hope you’ll enjoy your stay.

I’m a PC gamer on (near) minimal wage that enjoys anything that has a lot of heart put into it; be it a game, a story or even a simple question.

If you have some of the later to share, fill free to do so. I won’t promise to give an answer you will like, but I will give you an answer...with a little bit of my heart put into it.