Maria Calavera, also known as The Grimm Reaper, is a famous former Huntress and was once a Silver-Eyed Warrior before the loss of her eyes.

She first appeared in "Argus Limited". Her weapons of choice, of which she only has one in her elder years, were Life and Death.

Following the descent of Amity Colosseum due to the damage it took, it is unknown what happened to her or if she managed to evacuate Atlas before its destruction.

Maria is an elderly woman with dark skin and long silver hair, which she wears in a single braid down her back. She is of small stature and appears to be hunched over, requiring the use of a walking stick. However, it is shown that she can walk without it.

She wears a full-length dress in the traditional Tabasco style, consisting of a dark blue top with full sleeves and skirt comprised of alternating light and dark blue layers. In addition to her dress, she wears thick brown gloves and a heavy blue cloak trimmed at the edges with a pattern of white, hollow triangles on a light blue background. A similar white and blue trim is around the neck of the cloak. The cloak is secured to her shoulders with ornate white pauldrons.

Maria's eyes were slashed out by Tock, and she requires goggle-like prosthetic eyes to see. The prosthesis is dark gray with cyan colored lenses, each of which is equipped with a set of adjustable shutters capable of mimicking natural expressions. Four rectangular cyan lights create a partial ring on the outer bottom edge of the eyes, while a single cyan nodule on the top outer edge overlaps slightly with each lens. Two small antennae protrude vertically from the upper left side of the prosthesis. On the upper right is a port that allows for the attachment of a wireless receiver, allowing Maria to directly receive data from equipment.

As a young woman Maria was very beautiful, she had shoulder-length black ash hair, silver eyes, and was much taller. She wore an ornate skull mask that all but completely concealed her face, revealing only her lower jaw. She wore a laced waist-cincher over a long blue tunic with a dark gray hemline that fell over a dark teal skirt that also had the same gray hem. The tunic opens in a 'v' to reveal an off-white folded collar. The long sleeves are also cinched just above the elbows. All three cinches and the hem are the same dark gray as the hooded cloak Maria also wore. Her boots were dark brown. In addition, she wore a dark blue skull necklace. 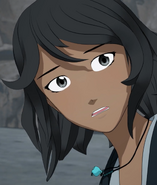 In her youth, Maria displayed a cocky sort of daring and recklessness in her fight against the Grimm as seen when she fearlessly leaped on top of a giant Nevermore and rode it all the way down while she was trying to kill it. According to Maria, when she was first starting out as a Huntsman she often used a flashy style of combat and in her own words admitted that she prone to showing off. A habit which she now greatly regrets as she believes her father would've been disappointed in her behavior. Her growing reputation as "The Grimm Reaper" may have also gone to her head as when she was confronted by Tock, she questioned if the mercenary leader realized who she was suggesting that she had begun to believe herself untouchable. This cockiness and presumptuousness would go on to cost her greatly in her fight with Tock resulting in the loss of her eyes.

In the present day, Maria has become older and smarter and more experienced, this, combined with her Semblance Preflexes, which allows her to predict when something is going to happen before it does, makes her a far more formidable foe then she was in her youth and she's no longer willing to take any unnecessary chances in her fights.

She is rather energetic and nonchalant in spite of her advanced age, allowing the train's derailment to roll off her shoulders as if it were nothing. She greets the heroes with friendly banter but easily takes offense to those who call her "defenseless" and "old". However, she is well aware of her current limitations, berating herself for not realizing the threat of the Apathy sooner.

Maria is shown to be sound-minded when tension rises, as shown when everyone becomes discouraged after Ozpin ceases leading the group. This trait is further shown when Maria orders Team RWBY to flee without hesitation once the Apathy appear. However, she is not above being petty and callous, as shown by her interactions with Caroline Cordovin.

After her flashback in "The Grimm Reaper", Maria states her deep regret over not doing more for the world, even going so far as calling herself "a disappointment." She warns the group not to strive to become like her, a fallen hero who lost the will to fight after she lost her eyes, showing a degree of bitterness and self-loathing over her own fears. Despite her shortcomings, she repeatedly shows a high level of faith in the current generation. Additionally, despite her abilities and skills, she preferred to go under an alias during her Huntress days and believes deeply in the beauty of life and its protection.

Currently, she is more durable and resistant than average, able to shake off a train crash, jump down a deep well without injury, and even run at a considerable pace despite her advanced age, shown during "Alone in the Woods".

In "Amity", Maria is able to fend off someone as skilled as Neopolitan with ease despite her elderly age by using her old muscle memory in combination with her Semblance, only losing due to getting distracted. Her blocks and parries during the fight were relatively simple and effortless regarding what she is capable of. However, her old age and lack of energy were still a major disadvantage and she didn't actually have a chance of winning the fight anyway, but still managed to achieve her actual goal of stalling her.[2]

Maria's weapon of choice is Life and Death. Originally duel kamas that not only contained a gun barrel but could be joined together to form a staff. At her prime she possessed high skill in combat, aided by her Semblance. In "The Grimm Reaper", she was able to fight multiple opponents at once, and she was capable of dual-wielding her kamas, making good use of the Gravity Dust within them. Due to her injuries from her battle with Tock and retirement, she now only uses one lone kama as a cane.

Maria's Semblance, nicknamed Preflexes,[3] allows her to sense everything better than most people and react to attacks almost before they happen. She can even react to attacks that outside her field of vision, such as people shooting her from behind. Maria relies on her Semblance just as much as her old muscle memory during her fight against Neo.[4]

Maria is also a certified aircraft pilot, being able to fly a Manta ship. Her piloting ability is aided and enhanced by her ability to cybernetically interface with the ship's sensor array via her prosthetic optic sensors.

Other than being able to fly aircrafts, Maria is able to pilot and use industrial worker mechs, using one in order to help Pietro Polendina complete the finishing touches in the Amity Communications Tower by lifting the heavy machines and parts for him and put them into place.

She later used the mech as a weapon, attempting to fight Cinder Fall and in order to fend off Neopolitan's Manta attacks.

Maria was born with Silver Eyes, which allowed her to project bright white light from her eyes that is lethal to the Creatures of Grimm. She had the ability to petrify a massive Nevermore in quick succession while disarmed. She had a relatively good understanding over the activation of the ability, refusing to label it as a means to destroy, but to protect, but little to no idea of its origin, until she theorized it was divine. After being blinded by Tock, she no longer has access to this ability.