Lie Ren, more commonly referred to by his surname Ren, is a Huntsman, a former student at the now-defunct Beacon Academy, a member of the now inactive Team RNJR and one of the remaining members of Team JNPR. His weapons of choice are a pair of green, fully automatic pistols with sickle-like blades attached vertically under the barrels, named StormFlower.[2]

Ren is a young man with long black hair that ends midway down his back. There is a magenta streak on the left side of his hair. His eyes match the streak in his hair, and his clothing often appears to be influenced by Chinese culture.

During his attendance at Beacon Academy, he wears a dark green, diagonally-buttoned, long-sleeved tailcoat that is red on the inside, with black and gold trimming and pink cuffs. The trimming goes down the right side of his torso and forms a black collar. Along with this, he wears a black, long-sleeved shirt beneath the suit and light-tan pants with black shoes. He ties his hair back in a low ponytail.

This color scheme seems to be influenced to some degree by the lotus flower, which is his emblem.

During his time at Beacon, he dons a standard male Beacon uniform.

At the Beacon Dance, he wears a black suit with dark red bow tie and light-gray vest. This suit is worn by the other male Beacon students.

After the timeskip following the Fall of Beacon, his outfit is updated. Ren wears his hair down, and it has grown longer, as his concept art notes, "almost butt-length". His attire is similar to before in color. He now has a longer, sleeveless tailcoat with black and silver trimming. Under it, he wears a black, sleeveless turtleneck with red, tasseled ropes over the hips, pants that get tighter below the knees and calf-high open-toed sandals. From his middle finger to his biceps run gradient pink-to-black detached sleeves ending in metal armbands.

As a child, he wore a similar outfit to his Volumes 4-6 one except for the magenta shoulder patches and the black open-toed sandals. He used to have his hair in a neat bun.

After arriving in Atlas and meeting with James Ironwood, Ren braids his hair and gains a new outfit. He now wears a sleeveless turtleneck dark green top, white long sleeves underneath, black half of a jacket/arm guard combination on his right arm with his father's dagger attached it, a single detached long black finglerless glove on his left arm, and black leather boots. The concept art has a sketch of Nora braiding Ren's hair, but this has not been confirmed as canon. 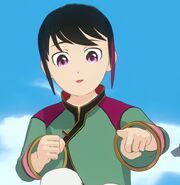 Atlas Outfit
Add a photo to this gallery

As a young child, Ren was much more cheerful and even a bit sassy according to his mother. He was also shown to be very naive, not understanding how to use Lien or thinking that he could buy sake. He also was easily frightened, as shown when the bullies looked at him and he was about to run away.

Ren is usually mellow and wishes for peace and quiet, much like Blake Belladonna. He seems very much in control of himself, as shown by his calm and deliberate response to the appearance of a King Taijitu. He is unbothered by Nora Valkyrie's bubbly and contrasting personality, showing a great deal of patience when dealing with his hyperactive, happy-go-lucky childhood friend.

Ren is also shown to be quite studious, as seen in "Welcome to Beacon", in which he openly agrees with Neptune Vasilias as to how libraries should be only for reading. Likewise, he is well informed about villages in between kingdoms, such as when he informs Ruby Rose about Higanbana in "Family". However, this is not to say that he is completely humorless. He is slightly playful after finding Nora in the Emerald Forest, during the events of "The Emerald Forest". This is also shown when he and Nora were debating over team names in "The Next Step". Ren is also indicated to be a bit of a cook, as he makes pancakes for the team in "Forever Fall, Pt.2" and is seen fixing dinner alongside Ruby in "Known by its Song". However, not everything he cooks is well received, as the nutrition drink he prepared in "Destiny" made Nora ill even though he drank it with no problems.

In "Remembrance", Ren is more solemn than his teammates are about the destruction of Shion Village. His advice is to keep moving forward. This is something he repeats with a bit of angry emphasis in "Two Steps Forward, Two Steps Back" when Ruby suggests going to the destroyed town of Kuroyuri in search of abandoned medical supplies. Being one of the few survivors of the Grimm massacre of that town manifests itself in Ren's less-than-calm emotions.

In "No Safe Haven", Ren reveals a much more reckless and vindictive side to him previously unseen, when he lets out all of his anger against the Nuckelavee in an attempt to avenge his parents and all of its other victims. This is a stark contrast to his usual calm and patience. During the Nuckelavee's execution by his hand, Ren seems to finally come to terms with his trauma, calmly and swiftly delivering justice for his family, the monster's victims and for himself. Following this, Ren seems to have finally come full circle, being more open with his emotions, particularly his feelings towards Nora.

Since then, Ren has become more noticeably conversational, vocal about his opinions and is known to speak somewhat philosophically.

After arriving in Atlas, Ren is shown to be struggling with some heavy emotional stuff[3] and his relationship with Nora turns for the worse when he ignores her affections for him during their first mission in Atlas. He becomes more focused on training and going on missions, and admits to Nora that he has a hard time expressing his feelings. Before chaos breaks out in "A Night Off", he is kissed by Nora and reciprocates, indicating his feelings towards her. However, after this, he becomes colder when he accepts Ironwood's order to arrest Robyn and find out who Tyrian is working for.

Later during the events of "The Enemy of Trust", Ren is shown to have trouble with sorting out his romantic feelings for Nora, as seen when he was caught off guard by Neopolitan's usage of Nora's physical appearance to make Ren hesitate, causing him to start crying while he escaped alongside his team. Later on, Ren is seen taking out his frustrations on the real Nora due to losing the Lamp and almost hurting "Nora" earlier. As a result, he began raising his voice at her to the point where Jaune Arc had to stop him, showing that Ren still retains his temper and inability to contain or restrain it due to the immense pressure of what's at stake. The writers have stated that despite his attitude change that he still cares about Nora, even if he doesn't always communicate it well.[4]

In "Fault", Ren lashes out at Yang Xiao Long after their failure in rescuing Oscar Pine, believing that they weren't ready to be Huntsmen yet and stating that they are way in over their heads. He also lashed out at Jaune and accuses him of cheating his way into Beacon, but seems to regret saying it right after.

Later in "War", after Harriet Bree states that teammates are replaceable, he vehemently protests, allowing his Semblance to evolve further and let him see the emotional states of the Ace-Ops.

He reveals to Nora in "Risk" that the reason for his change in personality during Volume 7 and Volume 8 was that he thought that by shutting everything else out that he could focus on the situation at hand, only to realize that he was just making things worse for everyone around him.

Ren is a very capable fighter and can hold his own against Creatures of Grimm, such as a King Taijitu. He demonstrates peak physical ability, being able to do various acrobatics. He can also move and react with impressive speed.

Ren appears to be proficient in martial arts, using palm thrusts and various combat stances when fighting the King Taijitu. His combat skills were also seen in "Best Day Ever" during a food fight with Team RWBY, where he briefly held his ground against Yang Xiao Long, although he was quickly bested by her.

Ren appears to have a high degree of control over his Aura. When fighting in the Emerald Forest, he first uses it defensively by forming a shield against the attack of a King Taijitu. After tearing its fangs off, Ren uses his Aura offensively by blasting the black King Taijitu's fang through its own eye, blowing its head to pieces.

Despite this, he still has a limited amount of stamina. Ren is shown collapsing after he, and the rest of JNPR, defeat the Death Stalker during "Players and Pieces". His average endurance is also seen after he defeats the King Taijitu as he catches his breath. This could be due to his heavy usage of Aura, which is needed to fight as shown in "Jaunedice". However, his lack of endurance is shown once again in "Best Day Ever", where Yang defeats him in very few blows.

He also has some form of extrasensory perception, as shown when he knows Tyrian Callows is approaching Team RNJR in the episode "Tipping Point".

Along with his physical abilities, Ren can also skillfully wield his weapons, StormFlower, and effectively uses them for both ranged and melee combat. As of "The Next Step", he can even use his weapons as boomerangs by throwing them as he did with one during the battle against a Geist.

Ren also carries a dagger that originally belonged to his late father, Li Ren. The blade of the weapon is similar in shape to the blades of his StormFlower. As seen in "No Safe Haven", the dagger itself is strong enough to easily sever the limbs of a Nuckelavee whereas the weapons of Team RNJR could not, even after repeated attacks. The dagger itself can also be thrown in an arcing loop. When everyone gained upgrades and new outfits in Atlas, Ren started carrying the dagger in a scabbard on his shoulder.[5]

Ren's Semblance, Tranquility, masks negative emotions,[6] which aids him in avoiding detection by Grimm, as demonstrated the night Kuroyuri was attacked. He can extend the effect of his Semblance to other people, as well as vehicles containing people.

In "War", his Semblance evolved to allow him to see the emotional states of others, which he used on the Ace-Ops to deduce their true feelings. Later in "Witch", Ren revealed that his newly evolved semblance allows him to detect the locations of others as well, though he cannot tell who they are.

Retrieved from "https://rwby.fandom.com/wiki/Lie_Ren?oldid=1172243"
Community content is available under CC-BY-SA unless otherwise noted.