(2) A constraint cube in both hands 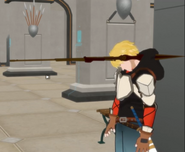 (6) Jaune's neck appears to be broken

(8) And only 14 fly off into the forest, instead of the 16 counted earlier

(9) 6:31, Magnhild reappears
Add a photo to this gallery
Retrieved from "https://rwby.fandom.com/wiki/Inconsistencies/The_First_Step?oldid=973837"
Community content is available under CC-BY-SA unless otherwise noted.