View source
watch 01:32
Who is Hazel Rainart?
Do you like this video?
Play Sound
—Hazel Rainart

Image Gallery Quotes Behind the Scenes

Hazel Rainart was a major-supporting antagonist in RWBY who was introduced in "The Next Step". He was an associate of Salem and part of her inner circle. He served as a main antagonist in Volume 5.

In "Witch", after learning about Salem's true goal, he decided to defect from her inner circle to help Oscar Pine and Emerald Sustrai escape from Monstra, during which he sacrificed himself to hold her back allowing Oscar to destroy her and Monstra.

Hazel was a tall and muscular middle-aged man. He was also unusually large and broad, as he was shown to tower over Adam Taurus who stood 6'4". He had short brown hair, a beard and hazel eyes. His hairy arms had large scars running up them, a result of using Dust infusions.

Originally, Hazel wore a two-tone olive green coat over a black 3/4 sleeve shirt, and a large belt. His pants were black, with a pouch strapped to each pants leg, and his boots are brown with white fronts. Some of his scars near the edges of his sleeves are visible.

As of Volume 8, Hazel wore his hair in a short slicked back ponytail, and had trimmed his beard shorter. He wore a sleeveless dark green vest with yellow trimmings, revealing the full extent of the scars running up his arm. Hazel wore bandages on his forearms, beneath fingerless brown gloves with silver armor over his hands. He wore brown pants with leather straps connecting to two belts, and armored boots that are similar to those of his previous outfit. 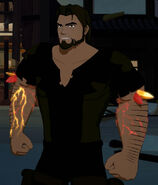 Infused with Lightning and Fire Dust

A younger Hazel as shown in a wanted poster

Hazel had a calm composure compared to the others of Salem's circle, being reserved and rarely speaking. However, he still criticized Cinder Fall for her defeat, showing he had a low tolerance for acceptance of failure, and he did not let minor obstacles get in his way or stand by convention when there is a goal to be accomplished.

During the meeting with Sienna Khan, Hazel was courteous toward her, showing he had a respectful nature. However, he was not intimidated by Sienna's threats, showing a distinct level of self-confidence.

Despite his low tolerance for failure, Hazel was not cruel or unsympathetic. His reaction to Sienna's murder by Adam was a saddened look and verbal expression of both his frustration at Adam's lack of communication prior to the act and disappointment at how unnecessary the death was. He also had a certain degree of empathy for others. When he returned to Evernight Castle with Mercury Black and Emerald Sustrai, he attempted to take the blame for Cinder's failure in Mistral, presumably to try and save the two from punishment by Salem. Unlike his psychotic colleague, Tyrian Callows, Hazel took no pleasure in casual slaughter, indicating there must be a higher purpose in violence for him to engage in it.

However, these traits changed whenever he encountered Ozpin. When he did, Hazel became filled with rage and killing intent. He initially held Ozpin responsible for the death of his sister Gretchen Rainart and was determined to kill every incarnation of him. He denied Gretchen had any choice in the matter of serving as a Huntress despite it being pointed out that it was her decision to be one, believing her to be seduced by tales of heroism.[1] This shows that despite his typical reluctance to fight, he was quite capable of vengeance and terrifying bouts of rage. Despite this, as revealed in "The More the Merrier", Hazel was perfectly willing to aid Tyrian in slaughtering Huntsmen across Anima, and he was stated to be completely merciless when a target is found. Additionally, he was stated to believe that the Huntsmen are useless to Remnant as a whole.[2] He also had no qualms with harming children, as he attempted to electrocute and kill Nora Valkyrie for standing between him and Ozpin in "Downfall". In "Fault", he brutally tortured Oscar Pine for the password to the Relic of Knowledge despite him being a child, showing how violent Hazel could become when blinded by his grudge.

In "Midnight", a more vulnerable side to Hazel was revealed. It is shown that he feared Salem, seeing her as an unstoppable force of nature. This is why he usually tried to prevent bloodshed and fighting. It is also why he sought vengeance against Ozpin, seeing him as someone who sends children to their deaths. While he didn't agree with Salem's plans, he followed them as he saw no choice.

During "War" when he was told of Salem's true goal, Hazel originally didn't believe until Oscar told him how to activate the Relic of Knowledge. This honesty from him eventually got Hazel to believe him.[3]

In "Witch", he and Emerald both decided to help Oscar escape from Monstra after learning about Salem's true goal. Ultimately, Hazel was motivated to help Oscar, his friends, and Emerald escape from Salem as way of and ensuring they will not be lost like his sister, leading to his sacrifice. As he knew that he wouldn't survive his fight against Salem, he deliberately overdosed on Dust so he could use as much power as he needed to.[4]

As a former associate of Salem, Hazel was a ruthless fighter and notably lacked a weapon, preferring melee based combat and Dust usage without the medium of a weapon. He relied on brute force and his Semblance. Hazel's fighting style was focused on simple wide swings, putting his full weight behind each blow. This combat style often left him open to attack, as shown by his fight with Ozpin.

However, he was still nimble enough to dodge strikes from opponents like Qrow and was shown to be agile against Salem's ranged attacks. A hint of his strength was shown when he casually dented a toll booth machine into dispensing a train ticket with his bare arm. While his fighting style was raw, he tempered it with intelligence as shown in the battle at Haven| when he grabbed Nora’s hammer and threw her away the first time they fought and disarmed her the second time, showing he is skilled in grappling as well. In addition he uses his muscular arms to block attacks that are likely enhanced by his Aura.

His physical strength was enough that he sent Salem flying with a single punch as well as brutally maim her body in their fight. Despite his considerable strength, Hazel would often hold back against opponents he considered to be children such as Nora and Ren, preferring to incapacitate such foes rather than kill.

His ferocity was combined with quick thinking and precision along with his mastery over Dust, as shown when he fought Salem utilizing numerous Dust combinations. All in all, Hazel’s strength combined with his Semblance and his control of Dust made him one of the physically strongest characters in the series.

He has only been shown to retreat at the behest of allies who were able to appeal to his more logical and compassionate side. Without this, it is unlikely that anything short of fatal or crippling force would have been able to cease his rampaging combat style.

When Hazel deemed the situation appropriate, he injected himself with raw Dust crystals. After Hazel infused himself, the veins in his arms glow, his muscles grow, his eyes shine, his voice becomes distorted, and he can discharge and fire Dust energy from his entire body to enhance his attacks. He was shown using two types of Dust, Lightning and Fire, being able to use more than one Dust type at a time to further increase his strength and combine attacks for enhanced hits. Because of his Semblance, the pain that came from injecting himself with raw Dust is minimized.

In "Witch", Hazel showcased the full extent of his power with Dust during his battle with Salem. He was able to combine Lightning, Earth and Fire Dust and mold it to form a volatile spiked boulder to throw at Salem, create a barrier using Hard Light Dust, propel himself through the air using Wind Dust, increase his physical speed and reflexes using Lightning Dust and create several fireballs using Fire Dust. The flawless use of the Dust he used showed him to have greater mastery over using Dust than anyone else shown.

Because of his use of Dust, the limits to his strength were unknown, but without it, he possessed enough strength to casually dent machines with an offhanded hammer fist. The use of Dust was not a substitute for his strength, but a supplement. Hazel's most notable attribute, however, was his endurance. He was able to block strikes from Qrow, Ren and Nora's weapons with his bare hands, the latter also commenting on the abnormally high rate that Hazel recharges his Aura. Qrow also took note of Hazel's incredible durability, referring to him as "sheer willpower".

During his fight with Salem, Hazel deliberately overdosed on Dust, as he knew he wouldn't survive against her.[5]

Hazel's Semblance, Numbing Agent,[6] rendered him insensitive to pain, allowing him to ignore injury and inject vast amounts of Dust into his body without any immediate consequence. However, despite this he was still susceptible to being injured.