View source
—Blake Belladonna, on the White Fang's use of Grimm Masks

Grimm Masks, were masks work by the Faunus terrorist organization the White Fang. They are named after and designed to resemble creatures of Grimm. Several variations exist and are used to hide the wearer's identity as well as denote their rank. They were introduced by Adam Taurus who hid his face after being scarred by the Schnee Dust Company.

While not a White Fang member, Raven Branwen wears a similar Grimm helmet.

The masks resemble the bone-like coverings on the faces of the Grimm. Several different masks are seen throughout the series. However, they all share an overall gray or white coloration and the intimidating appearance that conceals the identity of the wearer. According to Blake Belladonna, the White Fang's use of the Grimm masks are a response to humanity seeking to make Faunus into monsters. Adam Taurus was the first Faunus in the White Fang to wear the mask with this ideal, later inspiring others in the organization to do the same.

White Fang soldiers wearing another version of the mask

Adam's mask without the red markings

A closer look of Adam's mask

Adam's mask seen in the manga 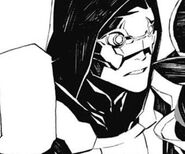