Glynda Goodwitch alludes to Glinda the Good Witch from the novel The Wizard of Oz. This allusion has had the following influences on the character and show:

Glynda's emblem is a tiara. This emblem appears on one of Glynda's possessions:

Battle outfit
Add a photo to this gallery

The credits for the episode "Fall" show a piece of colored concept art that does not look much different from Glynda's final design.

The concept art has the following four differences:

In an old render of her model, her cape is missing the tiara emblem, but everything else is the same. 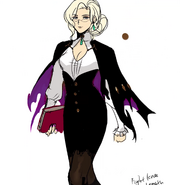 From the original Volume 1 Opening storyboard
Add a photo to this gallery
Retrieved from "https://rwby.fandom.com/wiki/Glynda_Goodwitch/Behind_the_Scenes?oldid=965852"
Community content is available under CC-BY-SA unless otherwise noted.