Emerald alludes to Aladdin from The Book of One Thousand and One Nights as well as the Disney movie.

Emerald's emblem is a stylized depiction of a cut emerald. This emblem appears on one of her possessions:

Emerald makes her first appearance in Volume 1 after credits scene as a 2D image, wearing an outfit that differs from the final version worn by her 3D model. The scene is very dark, but with a little editing, her outfit becomes more visible. The 2D version's differences are

An edited screenshot from the Volume 1 after credits scene

There is no visible difference between the concept art and final versions of the following appearance. 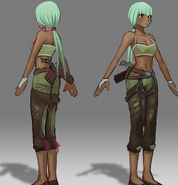 The Maya Emerald model in Volume 4