Crocea Mors[1] is Jaune Arc's signature weapon. Jaune has stated that it was passed down from his great-great-grandfather, who used it in the Great War. It is first seen in the episode "Ruby Rose" of Volume 1.

Both the sword and shield are shown to be incredibly durable, despite apparently being forged several generations prior to the present day. The sword is sharp enough to decapitate an Ursa Major, and the shield is sturdy enough to withstand several direct blows from an Ursa, a Death Stalker and The Executioner with no apparent damage.

The sword itself is a simple longsword with a blue handle and a golden cross-guard.

Jaune can transform the sheath into a heater shield for combat. The shield is white with a gold trim, displaying Jaune's emblem in the center. His explanation for the shield's transformation is that when his arm gets tired of carrying it, he can shrink it down. However, when Ruby Rose points out that it would still weigh the same, Jaune sheepishly concedes the point. The shield appears to deploy with significant force, enough for its tips to embed themselves in a wooden doorway in "Jaunedice".

The sword now has a heavier and more elaborate cross-guard and hilt. The shield is also accented with gold, including a design similar to Pyrrha's circlet at the point of the shield. The scuffs and scratches on both have also been mended, and the sword's blade has been polished to a new shine.

Due to the modifications, the sheath now possesses the ability to become a wider blade for the sword by extending the sharpened edges of the shield. Doing so adds the weight of the shield behind Jaune's blows, increasing the force of his attacks.

When Jaune, along with the other heroes, arrived in Atlas, they received upgrades to their weapons. Jaune's shield has been upgraded with Dust capabilities. Whenever said Dust is activated, the emblem in the center of the shield glows the same color. The first upgrade used was Hard-Light Dust, which extends to the sides, making the shield wider, and thus increasing defensive range. Gravity Dust can also be released from the face of the shield to propel himself in a direction, break falls, blast enemies backwards, and even bounce on it. Combining the two allows Jaune to use his shield as a paraglider of sorts to further slow his fall.

Gravity Dust upgrade
Add a photo to this gallery

In "Refuge", after visiting Pietro's Pharmacy, Jaune further upgrades Crocea Mors, taking a white and gold Dust grenade which is able to produce a large hard-light shield when thrown. The grenade can be recalled to Crocea Mors through the use of gravity Dust. 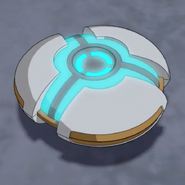 Recalled into shield
Add a photo to this gallery

Jaune has stated that Crocea Mors had been passed down through generations from his great-great-grandfather, who used it in the Great War. Various nicks and scratches could be seen on the blade and shield, indicating this long time of usage.

In "The Next Step", Crocea Mors and Jaune's armor were upgraded using either the broken remains of Miló and Akoúo̱; the weapons of the late Pyrrha Nikos, her circlet or both. The upgrade was made by the blacksmith of a village in Anima as a form of payment for Team RNJR defeating a Geist.

In "Ace Operatives", the shield was upgraded once more when Jaune arrived in Atlas, granting various Dust usage capabilities.

Retrieved from "https://rwby.fandom.com/wiki/Crocea_Mors?oldid=1155578"
Community content is available under CC-BY-SA unless otherwise noted.