Cinder Fall alludes to Cinderella from the fairy tale of the same name. This allusion has had the following influences on the character and the story:

Cinder's emblem is a pair of high heel shoes placed sole-to-sole in a way that creates a heart in the empty space between them. This emblem appears on:

The stealth outfit that Cinder uses in Volume 2 changed significantly from its early concept art by Kristina Nguyen.

The concept art depicts her wearing a full-body, long-sleeve, formfitting suit that is two shades of dark gray with black on the shoulders. Up her sides and partway onto her arms are black designs imbued with Dust, and on her back are more Dust-imbued designs in the same design as seen on the back of her original battle outfit. Around her waist is a belt with a pouch on the back for Dust. With this outfit, she appears to wear tall, black, wedge heel boots that reach just above her knees and a pair of long, black fingerless gloves that end partway up her forearms.

The final design that made it into the show has these differences:

The Grimm arm Cinder received went through a few designs. The concept art shows four versions. The first one still has the sleeve from her outfit with the hand only sticking out. The second version has the forearm being that of a Grimm with the upperarm still being human. The third one has a complete Grimm arm with bone-like spikes sticking out of the shoulder. The fourth version has the Grimm arm with her sleeve being torn up.

The final design that made it into the show is a mixture of the ones shown in the concept art.

Cinder's Atlas outfit had little change from concept to final show model. However, the concept art shows Cinder's nails were painted yellow and her cape's interior was a wine red in color. In the final, her nails are unpainted and her cloak has a black interior matching its exterior.

There is no visible change between the show and concept art versions of the following appearances. 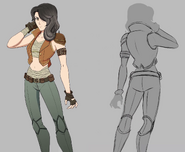 The Maya Cinder model in Volume 4