For her previous weapons, see Midnight.

After fully gaining the powers of the Fall Maiden, she stopped using Midnight, her sword-bow, and started using magic to create different weapons like swords, spears and knives. They are first seen in "The More the Merrier".

After gaining the full Fall Maiden powers and spending time training under Salem, Cinder learned to create fire glass weapons. She is capable of forming them out of seemingly nothing and transform them rapidly to suit any need.

After gaining the full Fall Maiden powers during the Fall of Beacon and spending time training under Salem, Cinder displays the ability to create new fire glass weapons. The weapons still seem to be made out of glass, but the inside of some feature a flames core whilst others are still obsidian.

She is seen having much more control over the shape of her weapons as she can create a number of shapes for different situations. She is seen creating a number of swords, a variety of daggers and a spear. When fighting Jaune she also showed that she can set her sword on fire. She can also summon two weapons at the same time and dual wield them. In her fight against Raven, both Maidens have shown the ability to surround themselves in elemental powers before summoning a giant, twelve-foot long sword with Cinder summoning a giant flaming rock sword.

When talking to Neopolitan in "The Grimm Reaper", she was switching between different daggers showing that she can control her weapon even when focusing on other things and that control over it has become second nature to her. The daggers she created are smaller than her swords and lack a flaming core.

As of "The Enemy of Trust", Cinder is able to conjure swords that are capable of exploding at will. They are shown being black in color, with flames spewing out of cracks and are similar to her giant sword in appearance.

Cinder's first weapon was Midnight, a pair of swords that combined into a bow. After obtaining half of Amber's Maiden powers in "Beginning of the End" she melted her physical weapons and started using glass blades based on the originals.

After gaining the full Fall Maiden powers in "Heroes and Monsters" during the Fall of Beacon, she spent time training under Salem and learned to harness her powers to manipulate fire and create weapons out of glass.

She is first seen using them during the Battle at Haven in "The More the Merrier" when she conjures a sword to block Jaune's attack and then fights him with it. She also shows the power to set her glass sword on fire. The sword disappeared when Ruby used her Silver Eyed power, giving Jaune time to attack her. Enraged that he came so close to injuring her, Cinder conjures a spear and hurls it at a defenseless Weiss, impaling her. The spear evaporates as Weiss collapses.

In "Vault of the Spring Maiden", Cinder reveals her true colors and Raven reveals she was the Spring Maiden all along. The two have an intense magical battle where both make use of their magical abilities. Cinder is shown summoning a plethora of different swords, even summoning two at the time. During an intense clash both Maidens show the ability to create a giant elemental sword. Raven's is made out of ice while Cinder's is made out of fire and earth.

When she takes Neopolitan to the Haven Vault in "The Grimm Reaper', she is seen switching between different daggers showing that she can control her weapon even when focusing on other things and that control over it has become second nature to her. 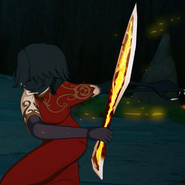 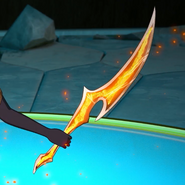 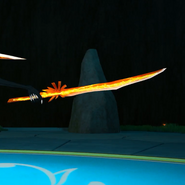