The ninth chapter was originally free on the Viz Media site until October 29th, 2019, the chapter was locked and is now only available for members of the site. The chapter became locked after Chapter 12 was released.

The chapter covers are mixed and rearranged "Best Day Ever" and "Welcome to Beacon", where Blake Belladonna gets interrogated by Ozpin about the incident with the White Fang. Afterward, Team RWBY and Team JNPR get into a food fight in the cafeteria. Meanwhile, one of the Ozpin's allies, James Ironwood asks Ozpin if his students are ready to fight on the battlefield. The first half-section covers the events of "A Minor Hiccup", where Team RWBY are about to begin their investigation of the whereabouts of the White Fang and Roman Torchwick until Sun Wukong eavesdrops on them and introduces his teammate, Neptune Vasilias. Sun wants to help Blake and her team since he has a hard time not sticking out for a friend. The chapter ends with Team RWBY along with Sun and Neptune starting their operation.

The Chapter 9 Japanese cover
Add a photo to this gallery 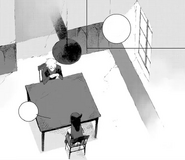 Blake gets interrogate by Ozpin.

Ruby talks to Blake and Weiss about their team plan today. 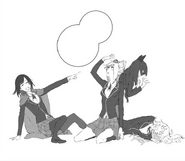 Team RWBY after the food fight.

Blake lets her team to help her out together.

Team RWBY, Sun and Neptune start their operation.
Add a photo to this gallery

Retrieved from "https://rwby.fandom.com/wiki/Chapter_9_(2018_manga)?oldid=1105011"
Community content is available under CC-BY-SA unless otherwise noted.