The ninth chapter of the manga adaptation of RWBY was published in Shueisha's Ultra Jump September 2016 issue on August 19th, 2016.[1] This chapter is the last to follow the four trailers continuity.[2]

Yang Xiao Long defeats Melanie Malachite and Junior Xiong in his club in Vale. Finally admitting defeat, Junior resigns himself to helping Yang but is unable to provide any information regarding the person Yang is looking for.

Ruby Rose unexpectedly shows up at the club and Yang orders them both drinks. As the sisters leave, Roman Torchwick is seen plotting in the shadows.

The aftermath of the fight. 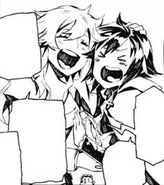 Yang happily reunites with her sister.

Retrieved from "https://rwby.fandom.com/wiki/Chapter_9_(2015_manga)?oldid=1083705"
Community content is available under CC-BY-SA unless otherwise noted.