The eighth chapter of the manga adaptation of RWBY was published in Shueisha's Ultra Jump August 2016 issue on July 19th, 2016.[1]

In a retelling of the "Yellow" Trailer, Yang Xiao Long fights Junior Xiong and both of his bodyguards, Melanie and Miltia Malachite, at his Club.

When Junior rips out a lock of Yang's hair in the melee, she has a flashback to a childhood memory of her combing her little sister Ruby's hair. Ruby compliments Yang's golden hair, comparing it to a burning dragon. Back in the present, an enraged and powered-up Yang retaliaties by knocking out Miltia in one punch. 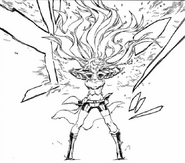 An enraged Yang powers up!

Retrieved from "https://rwby.fandom.com/wiki/Chapter_8_(2015_manga)?oldid=968995"
Community content is available under CC-BY-SA unless otherwise noted.