The seventh chapter was originally free on the Viz Media site until August 23rd, 2019, the chapter was locked and is now only available for members of the site. The chapter became locked after Chapter 10 was released.

The chapter covers "The Stray" and "Black and White". It starts off with Sun Wukong trying to talk to Blake Belladonna, but she ignores him until he tells her that he knows where the next robbery will take place, and asks her if she wants to prove her innocence.

Meanwhile, a flashback shows Weiss Schnee and Yang Xiao Long's relationship with Blake becomes strained after Blake accidentally tells them her secret. Ruby Rose suggest finding Blake, but Weiss and Yang disagree, since they have their own reasons why they do not want to search for her. Weiss does not need to know Blake's past because the fact that she is a Faunus and a member of the White Fang is enough to explain everything about her. On the other hand, Yang states that the reason why she did not pursue Blake is because she is afraid that if she learns the truth about her, she will feel that they cannot go back to the way they used to be. In the middle of the night, Ruby decides to search for Blake alone while the others stay in their dorm.

After Sun gives information to Blake about the next Schnee Dust Company cargo shipment, he suggests that they should go on a stakeout and catch the thieves together. Sun gives her two choices: She can either do nothing or join him in an all-out stakeout. Blake tells Sun that his choices are terrible.

Meanwhile, Ruby continues her search for Blake with no luck until she suddenly encounters Penny Polendina again. After Ruby tells Penny everything about Blake, she states that she thinks Weiss and Yang might be right about Blake. However, Penny says no matter what sort of person she may be, her friendship with her remains unchanged.

Somewhere in the outskirt of Vale, Blake and Sun meet at the top of the SDC Dust containers during their stakeout. Blake decides to open up and tell Sun about her past as a former member of the White Fang. Suddenly, the White Fang appear the scene, lead by Roman Torchwick. Blake decides to take action by taking Roman hostage. She removes her ribbon and tells the White Fang not to take orders from him and retrieve their pride as members of the White Fang. However, Blake's words do not reach them since according to Roman, they do not have any pride and they want to work with him. The chapter ends with the White Fang members prepares to fight Blake.

Chapter 7 Japanese cover
Add a photo to this gallery

Sun gives info to Blake about the next robbery

Ruby's conversation with Penny about Blake 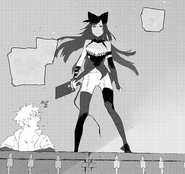 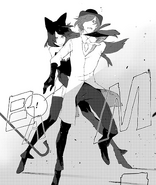 Retrieved from "https://rwby.fandom.com/wiki/Chapter_7_(2018_manga)?oldid=1105009"
Community content is available under CC-BY-SA unless otherwise noted.