The seventh chapter of the manga adaptation of RWBY was published in Shueisha's Ultra Jump July 2016 issue on June 18th, 2016.[1]

The chapter opens with a flashback to Yang Xiao Long promising a young Ruby Rose that she will protect her.

Years later, in a retelling of the "Yellow" Trailer, Yang visits an information broker, Junior Xiong, at his Club in Vale. After defeating his henchmen, she interrogates him for information regarding the whereabouts of a certain person. However, before Junior tells her anything, Yang is attacked by his bodyguards, Melanie and Miltia Malachite. 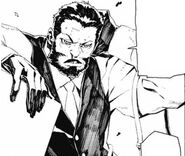 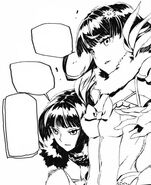 Melanie and Miltia charge at Yang.

Junior's counterattack on Yang.
Add a photo to this gallery