The sixth chapter was originally free on the Viz Media site until July 23rd, 2019, the chapter was locked and is now only available for members of the site. The chapter became locked after Chapter 9 was released.

The chapter covers "The Stray". It starts off with Team RWBY, Jaune Arc and Pyrrha Nikos attending Bartholomew Oobleck's class about Faunus and the terrorist group, the White Fang. After class, Team RWBY decides to explore Vale and talk about the upcoming Vytal Festival until they spot the scene of another Dust robbery. Suddenly, they encounter a monkey Faunus, Sun Wukong, who just dined and dashed and is being chased by the restaurant employee. Ruby Rose attempts to chase after Sun with her Semblance until she accidentally runs into a girl named Penny Polendina. After Penny introduces herself to Team RWBY, she asks Ruby if she can be her friend, and Ruby cannot say no to her and unintentionally becomes her friend. She attempts to ask her team to help her, but they ditch her to avoid having a conversation with Penny.

Meanwhile, Weiss Schnee and Blake Belladonna get into a big argument about what they think of Faunus. Weiss states that the Faunus are thieves and murderers. However, Blake states that the Faunus are misguided and not all of them are bad. As Weiss continues to argue with her, Blake accidentally reveals that she is a Faunus to Weiss and Yang Xiao Long, leaving them in shock. Blake runs away from them, despite Yang's attempts to stop her.

Somewhere in Vale, Blake takes off her ribbon, revealing her cat ears. She recalls the words of her former partner, Adam Taurus, about how the White Fang needs her as well as the words that Weiss said to her earlier. The chapter ends with Blake encountering Sun again; he asks her if there anything troubling her and calls her his new Faunus friend.

Chapter 6 Japanese cover
Add a photo to this gallery 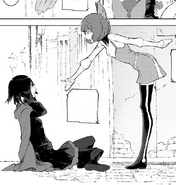 Blake accidentally reveals her secret to Weiss and Yang

Retrieved from "https://rwby.fandom.com/wiki/Chapter_6_(2018_manga)?oldid=1105008"
Community content is available under CC-BY-SA unless otherwise noted.