The sixth chapter of the manga adaptation of RWBY was published in Shueisha's Ultra Jump June 2016 issue on May 19th, 2016.[1]

The chapter is a retelling of the second half of the "Black" Trailer, featuring Adam Taurus' fight against the Spider Droid and Blake Belladonna's departure from the White Fang. It also features an opening narration about the feud between the Humans and the Faunus.

Blake revealed as a Faunus 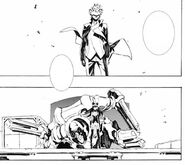 Blake and Adam's departure
Add a photo to this gallery

Retrieved from "https://rwby.fandom.com/wiki/Chapter_6_(2015_manga)?oldid=1097737"
Community content is available under CC-BY-SA unless otherwise noted.