The chapter covers "Players and Pieces", where Ruby starts observing Weiss, thinking that she might be an impostor since the Weiss she knows is never nice, but Weiss reassures it is her. After both Ruby and Jaune get their artifacts, a Nevermore suddenly appears at the Abandoned Ruins and a Death Stalker starts to break free from its frozen prison. Jaune suggests escaping while they still a chance as everyone agrees with him except Ruby. She suggests to everyone that they should fight the Nevermore and the Death Stalker instead of running away since if they run, the Grimm will be targeting other students in their place or worse. Everyone agrees with Ruby to fight the Grimm.

They also decide to split into two groups to attack one of the Grimm: Ruby decides to be in a group with Weiss, Blake and her half-older sister, Yang to take on a Nevermore. The second group lead by Jaune in a group with Pyrrha, Nora, and Ren to fight against a Death Stalker. The chapter ends with two groups starting the battle against the Grimm.

Chapter 4 Japanese cover
Add a photo to this gallery 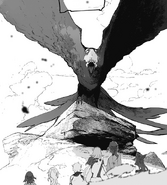 A Death Stalker gets free from being frozen 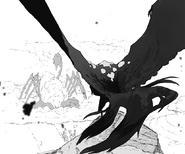 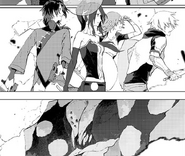 Retrieved from "https://rwby.fandom.com/wiki/Chapter_4_(2018_manga)?oldid=1097735"
Community content is available under CC-BY-SA unless otherwise noted.