The fourth chapter of the manga adaptation of RWBY was published in Shueisha's Ultra Jump March 2016 issue on February 19th, 2016.[1] It gives more perspective on the battle in the "White" Trailer.

As Weiss Schnee battles the Arma Gigas, she reflects on a conversation she had with her sister, Winter Schnee, when she was a child. Weiss is crying in front of her miniature piano, and Winter asks her if she is going to give up again and stay at home "playing house". Suddenly, Weiss receives a heavy blow from the Arma Gigas, receiving a cut down her left eye. The SDC secretary comments that her Aura is at its limit, but Weiss claims that this is no problem and continues fighting.

The secretary begins trying to guilt Weiss into staying in Atlas by talking about how much her father loves her and her singing. Her father has a lot on his hands with the White Fang and the well-being of his employees, which is why he needs Weiss to stay home since Winter has left. However, Weiss sees through this manipulation and shouts at the secretary to stop.

As she begins to overpower the Arma Gigas with the use of Dust, she reflects on how she always thought that she was special until Winter's words and actions showed her the truth. The praise she received was only because of her family name, and she used to carry a distorted view of family pride and never had a sense of self. As she delivers the final blow to the Arma Gigas, Weiss vows to not be a Schnee playing house but to create a sense of self that she can be proud of, just like Winter did.

Weiss receives an injury to her eye

Weiss uses one of the types of Dust in Myrtenaster 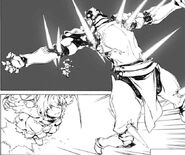 The Arma Gigas is being bound by Weiss

Weiss stands onstage, ready to sing
Add a photo to this gallery

Retrieved from "https://rwby.fandom.com/wiki/Chapter_4_(2015_manga)?oldid=1103667"
Community content is available under CC-BY-SA unless otherwise noted.