The third chapter of the manga adaptation of RWBY was published in Shueisha's Ultra Jump February 2016 issue on January 19th, 2016.[1]

Weiss Schnee, heiress of the Schnee Dust Company, was raised from youth to strive to be the best in all she did and excelled at activities such as singing and playing the piano. Although praise was generously heaped upon her by others, she had always lacked the approval and recognition of her father.

Years later, Weiss is training in combat with her weapon, the Multi-Action Dust Rapier Myrtenaster, under the supervision of her father's secretary. The secretary praises her skills in combat and mastery of her Semblance but states that she must continue to apply herself in her training at Atlas Academy. Weiss reminds him that she has already stated her intention of studying at Beacon Academy in Vale, in order to put distance between her and the family. When the secretary attempts to dissuade her from studying at Beacon, claiming her father is merely concerned for her well-being and thus wishes to keep her close by, Weiss acerbically calls the secretary a mere puppet of her father.

In response, the secretary unleashes her next opponent, an enormous animated suit of armor which has been "possessed" by multiple specimens of possession-type Grimm. The armor is described as being as powerful as a mecha-suit and three times stronger than the original model. Weiss notes that the secretary is basically telling her that she has no chance of winning. It is revealed by the secretary that her father wants her to fight it as a "test" if she continues to insist on attending Beacon. Weiss retaliates with Myrtenaster as the suit attacks. As she fights the construct, Weiss decides that she is tired of continuously living up to the expectations of others. 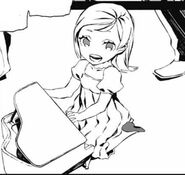 Weiss as a child

A glimpse of Weiss' father 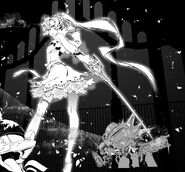 The Arma Gigas
Add a photo to this gallery

Retrieved from "https://rwby.fandom.com/wiki/Chapter_3_(2015_manga)?oldid=1103666"
Community content is available under CC-BY-SA unless otherwise noted.